This question is basically a variation on this one. Yesterday during a game I encountered a rather puzzling (for me) combat interaction involving Inquisitor's Flail.

I understand that if my creature didn't have first strike, I would assign 0 damage to defending player, since I have to assign lethal damage (=3) to the creature before the damage is doubled by the Flail (bringing it to 6).

Does first strike change this interaction in any way? 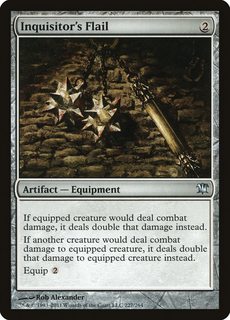 No, First Strike does not change this outcome. You will still deal 6 damage to the blocking creature and no damage to the defending player.

First/Double Strike only causes another combat damage step to occur, during which only creatures with First/Double Strike deal damage. This additional combat damage step works the same otherwise, in particular as far as damage assignment is concerned. You are still required to assign 3 damage to the blocking creature, which is then doubled to 6. First strike or not, there will be no damage left to be assigned to the defending player.

The only difference between your creature having first strike or not is whether or not it survives combat with another 3/3.

13
How does Inquisitor's Flail interact with Trample?

13
How does Inquisitor's Flail interact with Trample?
27
How does the double strike mechanic interact with other mechanics like lifelink or trample?
13
How does trample interact with damage prevention effects and indestructible blockers?
14
Do things on the stack or state-based effects resolve between first strike and normal combat damage?
0
Blocking with First Strike + Deathtouch
10
Damage distribution with Banding and Trample
2
Damage Trample and Lifelink which cause Damage
1
Does the first strike damage step happen even if no first strike damage is going to be dealt?