About twenty years ago I saw this game board. It was huge, the size of a table. Made of wood. And on it was an 18-hole golf course, complete with pegs and barriers for hazards.

You played with coins (or at least, when I saw it people were using coins). Using your thumb, you'd slide a quarter or penny or nickel, whatever you had presumably, and you'd bounce it off the sides of the board and the barriers and pegs, hoping to get it in the next hole. Each hole was an indented circle drilled out of the wood and was numbered.

Players took turns, and could hit each others coins out of the way.

I've been looking to find it again for ages without any luck. As big as it was, it was probably expensive and produced in a limited quantity. I've search the net for penny golf, quarter golf, coin golf, for years with no luck. Now that I see a board/card game section of stackexchange, I though I'd give it another shot.

Anyone heard of this?

I originally posted this question as a guest and am unable to select an answer, however, thanks to everyone who posted here, I have my answer and I'd like to share a little information with you all on the topic.

World Wide Games of Colchester originally made the game. It was indeed called "Fore Par", and it included wooden pucks with little rubber rings on the outside of them to help them bounce. It was a large, plain wooden board (the exact dimensions of which I am still trying to pin down) with pegs and recessed "holes". At one time, the game sold brand new for $158.50. Here is an archived article from the NY Times that mentions the company and the game and cost, as well as other games made by WWG: http://www.nytimes.com/1989/03/12/nyregion/from-adi-to-skittles-to-yoot-making-fun.html

In some instances, Fore Par was included in a "cabinet" set of games you could purchase from World Wide Games. 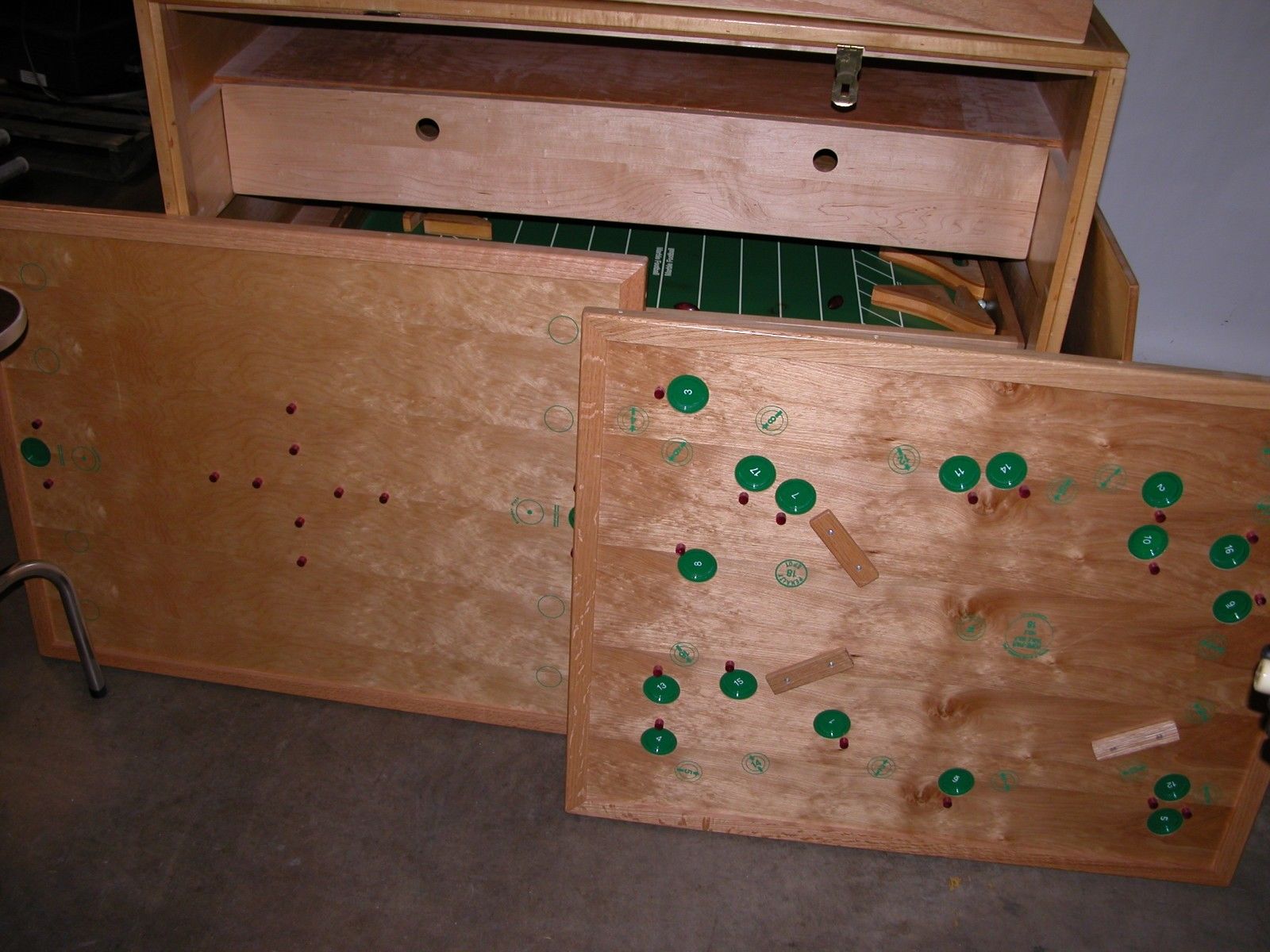 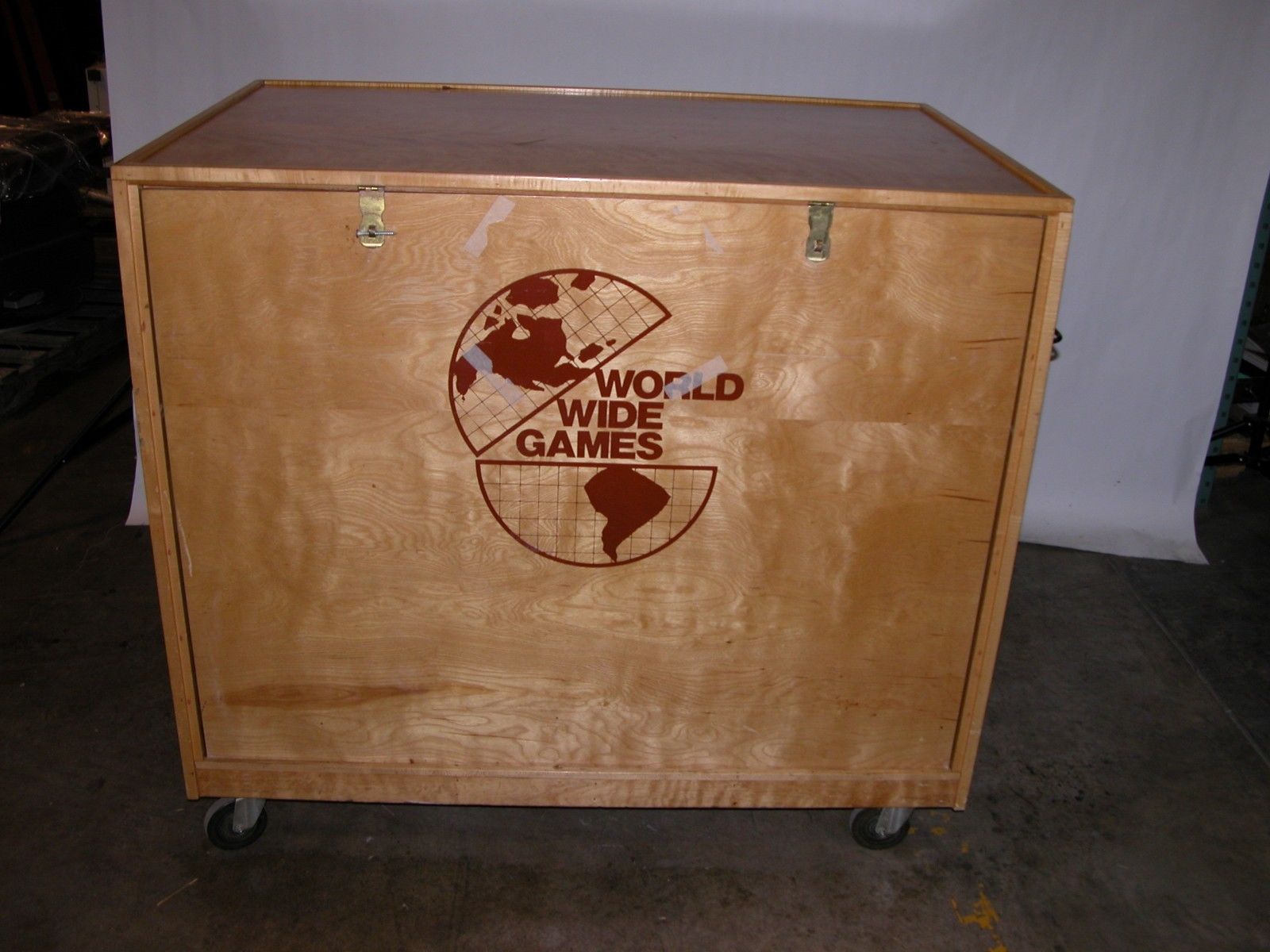 World Wide Games was eventually purchased by S&S Worldwide. Sometime later, SSW would build a similar game known as "Bumper Golf". I didn't recognize the game because of the graphics and I thought for sure they weren't the same game (since it didn't use coins), but since I found a picture of the original Fore Par, I've been corrected. In fact, looking closely at both of them side by side, you can see that the layouts are EXACTLY the same, the only difference being the starting point for the 4th hole is shifted slightly to a different position. (See photo). 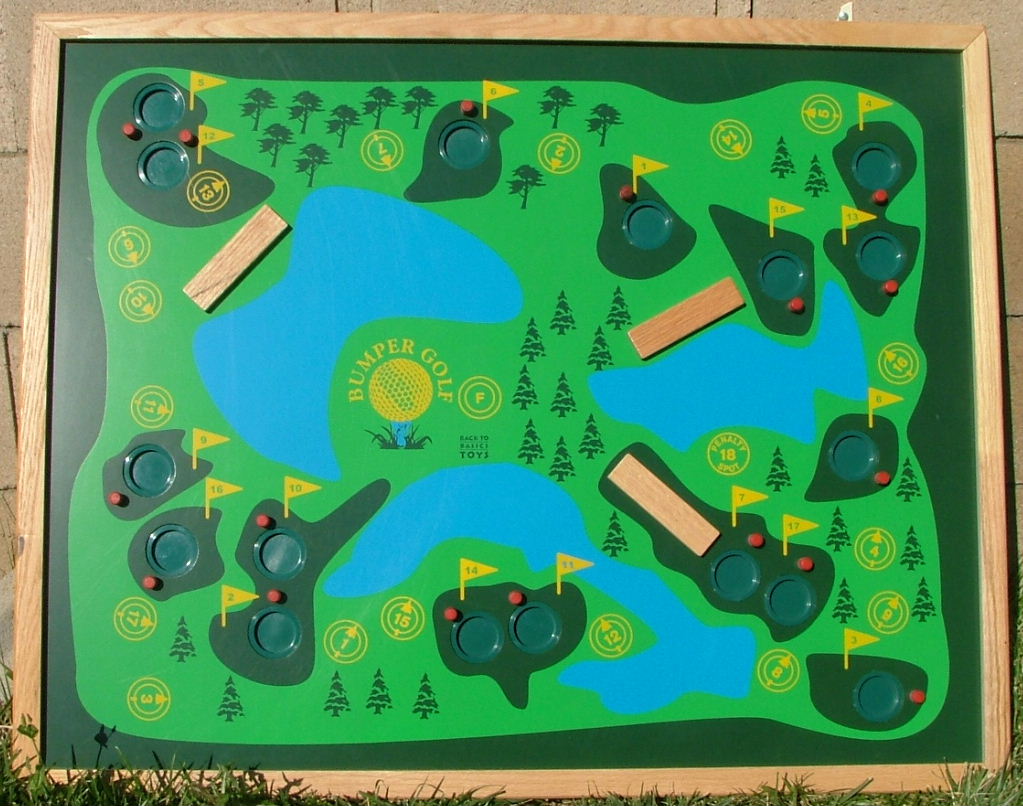 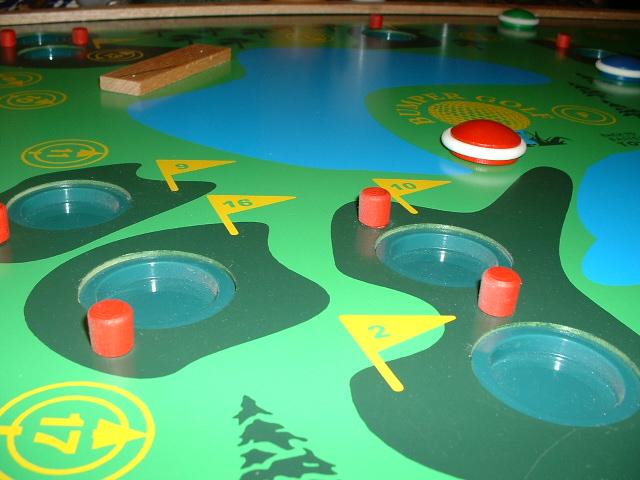 I wish I knew a little more history about the original Fore Par game, and a history of the company World Wide Games. Seems they cared about making a quality product that was used by many educational institutions (schools, YMCA's, etc). It makes perfect sense that I originally played this game as a child at my elementary school.

At my school, the wooden pieces were long gone, and the board had been played with coins for many years. So long that years of coin-impacts had worn away at the wooden sides and hazards at the best places to bounce the pieces.

I have this game. It is called Fore-par table golf. It was made by world wide games Inc. out of Delaware OH.

The board is made of all wood and is very durable.

The original game was called "Fore Par" and it was manufactured by World Wide Games. It was a wooden board with, as noted 18 holes, bounded by wood bars and dowel pegs to make the shots trickier. The 'golf ball' was a wood disk which had a rubber ring around it so that it could bounce off of the pegs, bars, and frame around the board, so one could 'bank' shots in as in pool. World Wide Games was bought out by S&S World Wide, out of Colchester CT, who continued to manufacture the game for several years, along with "bumper puck", a bumper pool style game which used the same pucks. Unfortunately, the company no longer makes either game, and I have been unable to find replacement pucks anywhere, which is sad, since I do have one of the games.

What you describe sounds a lot like Carrom, but on a golf course-style board, so a (slightly gimmicky) Carrom variant. Do the games described on this page sound like what you saw? In particular, Bumper Golf sounds like a strong candidate:

Bumper Golf, published by S&S Worldwide is a version of the Carrom golf board game sometimes seen in parks and arcades. The game board depicts an 18-hole golf course. Players shoot wooden disks from numbered tee spots, trying to sink their disk into the equivalent numbered cup.

An American Carrom variant based on golf is also described on Wikipedia, but unfortunately there is no reference for further information:

A version of American carrom was played in Southern California schools in the 1950s–1980s, using a somewhat larger square board and wooden rings struck with cue sticks.[citation needed] There was both a golf version and a maze version. In the golf version, there was a series of nine "holes" (really just green areas on the board.) A player had to start at the tee for a particular hole and get a carrom coin completely within the green region to advance to the next hole. Sand trap hazards would cause the player to lose a stroke and lake hazards would cause the player to lose two.[citation needed] A modified commercial version also exists.

I played this game only a few weeks ago in Sweden! I went over to a friend's place for Christmas, and after dinner her family pulled out this really old game from Finland, just as you described! Using coins, 8 or 9 levels, with wooden obstacles to increase difficulty. You can play in teams (we did men vs women), and each player has 5 attempts to get the coin across the obstacle and into the scoring zone (the hole itself, or numbered sectors around it). After 5 failed attempts, you get 9 points. Hole-in-one is 1 point. Like golf, highest amount of points loses. It was a lot of fun! I forget what it was called... I'll ask my friend and get back to you.

I think what you are looking for is called Strokes Table Golf (http://www.strokestablegolf.com/) It is a Carrom like game with a custom board exactly as you describe it. It has jumps, ramps, and other hazards. My feeling tho is this may just be the modern version of the game which is different than what you had played. They also have an iPhone app.

3
Identify this card game, where you have to beat previous cards put on the table
5
A board game with astronauts?
4
Table top maze game
2
Game With Space Battles
12
What is this round board game on a turn table?
5
What board game for 2 to 4 players with 1 token each and the winner is the first to the top of a raised platform?
3
Ancient Olympics Top Trumps Style Game