What does the "Appoiintment with the Street of Peace" Monopoly chance card mean?

Can anyone please help me with this card, it is so confusing. 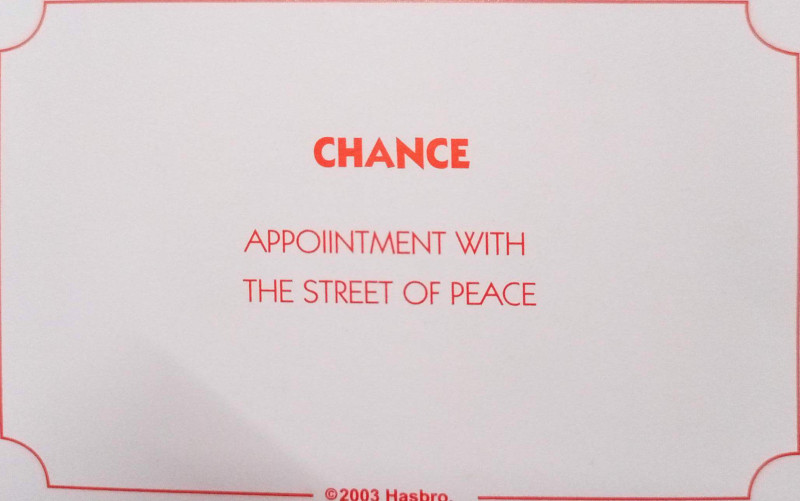 This card appears to be poorly translated into English from a French version of the game. In the original English, it would be "Advance token to Boardwalk", so you simply move you token forward until you get to Boardwalk, and then deal with it normally (either pay rent, or purchase it, etc).

In the official French version, the card says "Rendez-vous à la Rue de la Paix". The Boardwalk space is called "Rue de la Paix", which translates to "Street of Peace". And "Rendez-vous" is literally "go to", but generally translated as "Appointment" because that's also how it is used.

12
What are the order of actions in Monopoly?
24
What is the special die with pictograms in Monopoly used for?
21
What are the reasons behind naming the "community chest" and "chance" cards in Monopoly?
11
In Monopoly, what happens if the auction winner cannot pay his/her bid?
4
Chance card in monopoly
3
Do you move forwards or backwards on the King's Cross Chance card?
9
Monopoly Stock Exchange add-on: How does the add-on change the probability of landing on the properties?
3
Monopoly chance card "move to" utility owned by person who recieved card
1
Monopoly Chance Card
1
What is the width and height of the "Chance" and "Community Chest" cards in Monopoly?