Stamina Booster of Tinkerer, why both icons: Lost or Consumed and Cannot Recover?

If the performed action from a card contains a "Lost or Consumed" symbol in the lower right of the action field, the card is instead placed in a player’s lost pile. Lost cards can only be returned to a player’s hand during a scenario by using a special recover action.

Certain abilities allow a player to recover discarded or lost ability cards. This means that the player can look through his or her discard or lost pile (or discarded or lost cards in his or her active area), select up to a number of cards specified in the ability, and immediately return them to his or her hand. Some cards, however, cannot be recovered or refreshed once lost. This is denoted by "Cannot Recover" the symbol. This symbol applies to the card no matter how the card was lost or consumed

It seems that the only difference is that the card ends up in the lost pile instead of the discarded pile, but since it cannot be recovered anyway, why/when does this matter?

I'm answering my own question, because no one else cannot read my mind and without it the question is not really answerable. I would delete the question but it already has an answer.

Your confusion is stemmed from the fact that you were comparing the digital version cards (which you own) against physical game rules (which you do not have), and because the icons are different in the digital version vs physical one you mixed up "Lost or Consumed" and "Cannot Recover": you thought they were the other way around. Once you realise that, everything falls into places.

It seems to me that "Cannot Recover" does everything that "Lost or Consumed" does and more.

This is mostly true, but "Lost or Consumed" is much more frequent than "Cannot Recover". These cards go to the Lost pile, you do not get them during your short/long rest, but you still can recover them.

Why does this card have both icons? What "Lost or Consumed" signifies, that "Cannot Recover" does not?

If the card only had "Cannot Recover" and did not have "Lost or Consumed" it would go to the Discard pile, not to the Lost pile. And then you would be able to get it back during you rest, since rest is not the same as "recover". This was not intention for this cars, so it gets both icons. In fact for most (if not all) cards that have "Cannot Recover" the intention is that this ability is only used once per combat, that's why those cards also have "Lost or Consumed" icon.

It could have been possible to print just a single "Cannot Recover" icon on those cards and add a rule that those cards also should be ignored in the Discard pile during rest, but it seems it would only add confusion without providing any real benefit.

Some cards are lost or consumed when you play them. When you play a normal card it goes into you discard pile and the next round you'll get that card again.

Some card have a one time use ability. After you play that card and use the ability (top or bottom half of the card, in this case the bottom part) that has the icon the card goes into your lost pile. The cards in your lost pile cannot reappear in your hand. 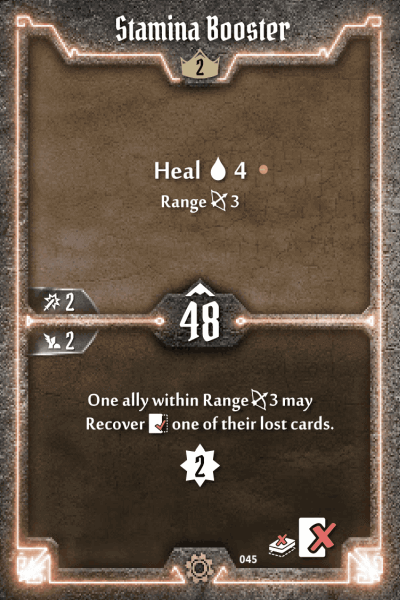 This card lets you regain a card from your lost pile and add it to your discard pile. For doing this you have to sacrifice this card (place it in the lost pile)

icon means you cannot regain this card with a

ability, no matter how it ended up on the lost pile (resting, playing or other events).

Not the answer you're looking for? Browse other questions tagged gloomhaven .

5
Can I select which ability to use on my second card after using the first card?