What is this game with a wooden fish board and many little pinholes?

I bought this in a thrift store in Sitka, Alaska, in 2014. I assume it's a 2-player game with little pins that go in the holes. 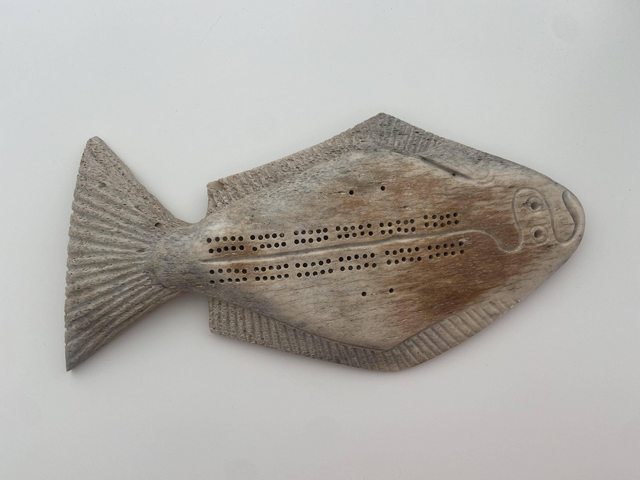 ltenorioltenorio
36999 bronze badges
New contributor
ltenorio is a new contributor to this site. Take care in asking for clarification, commenting, and answering. Check out our Code of Conduct.
0
Add a comment  |

The fish is a plaice. The board layout looks similar to Cribbage. There are different board layout to it, but wikipedia has one that looks like your fish. I'm saying similar since I'm unfamiliar with the game itself and there seems to be 4 little extra holes in your fish.

The Google search term I used was peg 60 holes and from there the first few images already returned similar ordered ones as on your fish.

As per the comment and credit to @Shannon, the extra holes are usually for either storing your pegs when not in use, or for keeping score for multiple games

ZibelasZibelas
30155 bronze badges
New contributor
Zibelas is a new contributor to this site. Take care in asking for clarification, commenting, and answering. Check out our Code of Conduct.
1
Add a comment  |

9
What is this tile-based game?
4
Two person wooden peg board game?
10
What game is this with colored tokens, a dice, and what looks like a spoon?
6
Wooden circular tower with independently revolving multi-holed layers and wooden balls
4
What is the name of this fantasy game with cards and little treasure counters?
12
What is this round board game on a turn table?
2
What game is this? 8x8 wooden grid with 2 sets of 9 marbles
9
What is this wooden animals game with unique dice?
5
Does anyone know where this weird blue and green laughing chess set is from?
6
Identify this wooden 24 hole pegboard game