What is the memory-style game that has pawn-like tokens covering pictures?

I remember a while ago having played a memory-like game which had blue plastic "pawns" which covered holes in a round cardboard sheet, while a second lower layer of cardboard was able to rotate underneath. There were pictures on the lower layer which corresponded to the holes in the upper layer, and there were several different possible picture combinations. What is that game called? 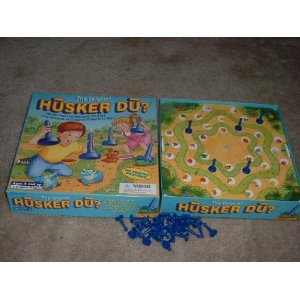 15
Soviet space exploration board game (now with pictures)
3
Name of empire building game with negotiated alliances?
0
What is the name of this solitaire style card game?
10
What game is this with colored tokens, a dice, and what looks like a spoon?
6
Wooden circular tower with independently revolving multi-holed layers and wooden balls
3
Saboteur/survival game with dice mechanics
1
What was the game with a plastic Bigfoot that left footprint counters?
4
What is this fantasy style card game?
2
Michigan Rummy? Incorrect Name?
12
Help me identify an old family board game (from memory)