Cosmic Encounter was the first of many games based on the idea that you get some special power that allows you to break a rule in the game. Which powers were best?

I include two answers for this question, one based on my own data set, another based on a combination of 3 different players' data sets. Both sets of data are from the early 1980s, based on Ted Schmeckpeper's data collection method (http://daveola.com/CosmicEncounter/Magazine/Encounter.1.3.pdf): Each game is worth a number of points equal to the number of players, and these points are divided among the winning players and their powers.

In addition to the two answers I provide below for the 1977 EON version of Cosmic Encounter, this would be a great place to collect additional data sets on any of the more popular versions of Cosmic Encounter. So feel free to post as answers more data sets, links to data sets, or tabulated results.

The following tabulated results are from over 500 games of the 1977 EON version of Cosmic Encounter. The vast majority of games were from 3 to 5 players, and I personally played in approximately half of them. Due to the high variability in game outcomes, one has to question the statistical significance of powers played only a small number of times (< 15?). The label headings are defined as follows: 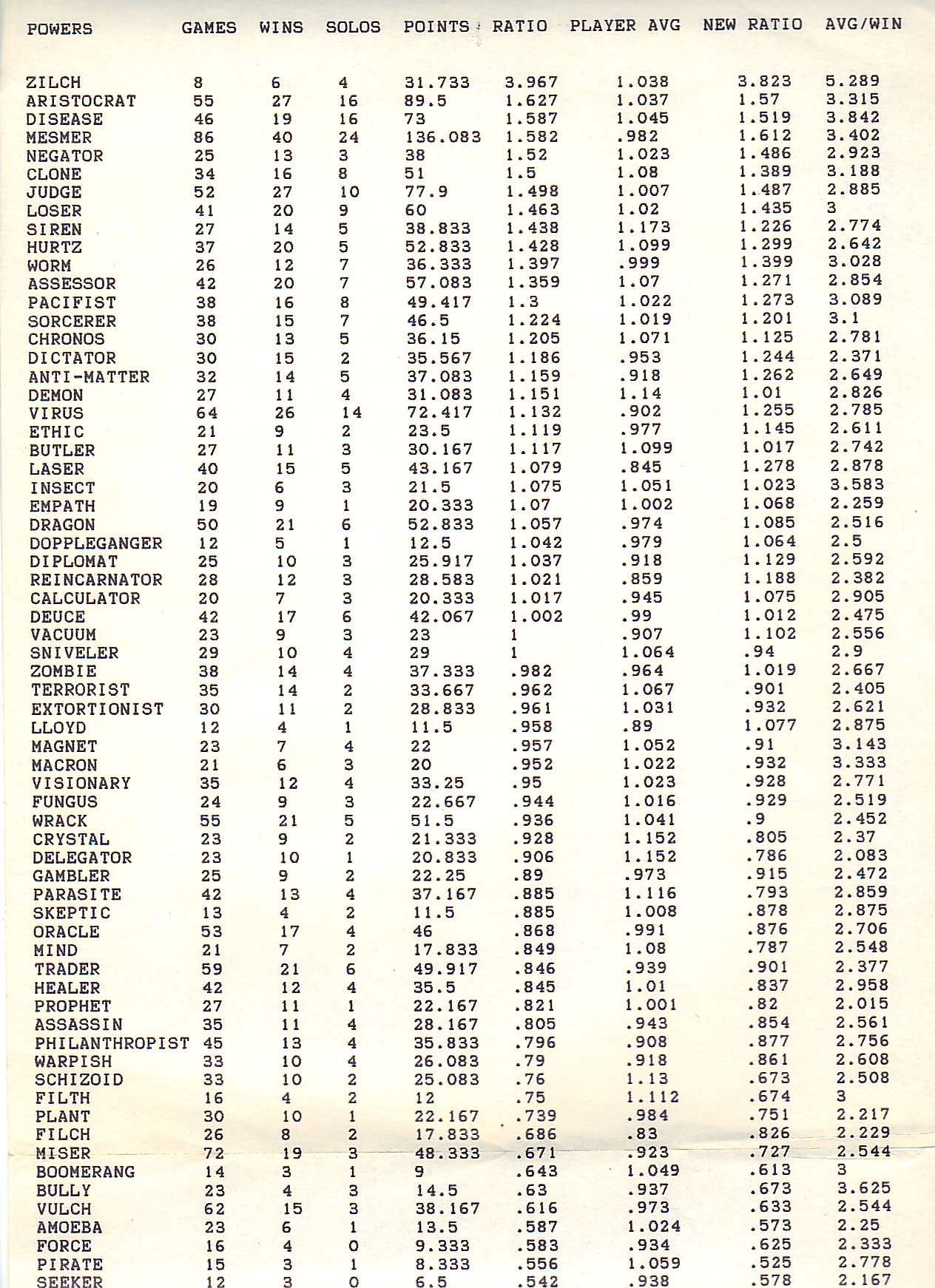 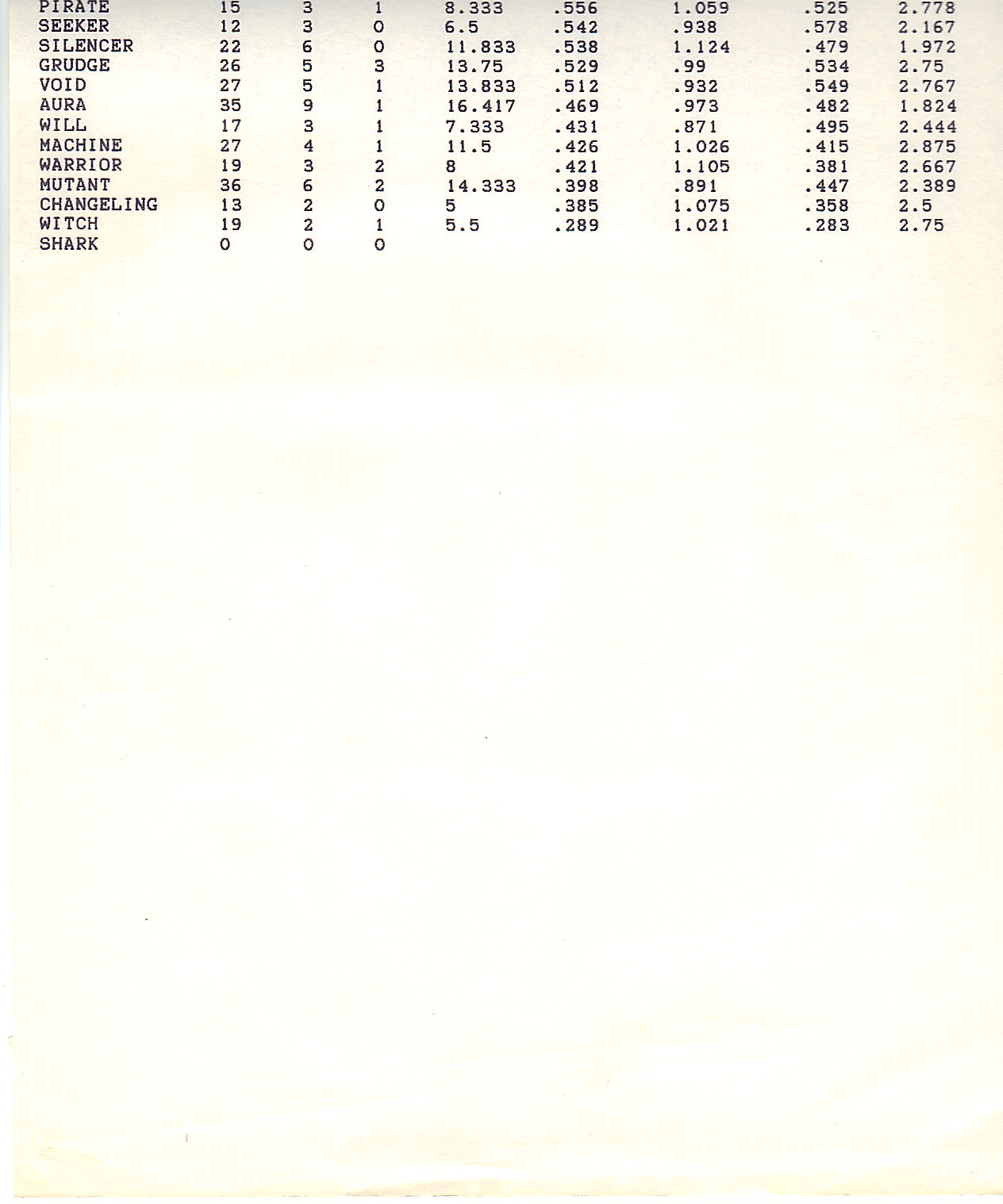 In 1984, Ted Schmeckpeper combined data from 3 different playing groups into one set and discussed the results in a private report, which so far as I know was never made public. Here is page 1 of the report, followed by 2 tables which answer the question.

The first table includes only powers which played in at least 33 games (Ted's significance cutoff). The second table includes powers which played less than 33 games, the significance of which Ted questioned. Note that the largest of the 3 playing groups was mine, and that my group played more games subsequent to this report - which means there is overlap between this data set and the data set provided in my other answer to this question. 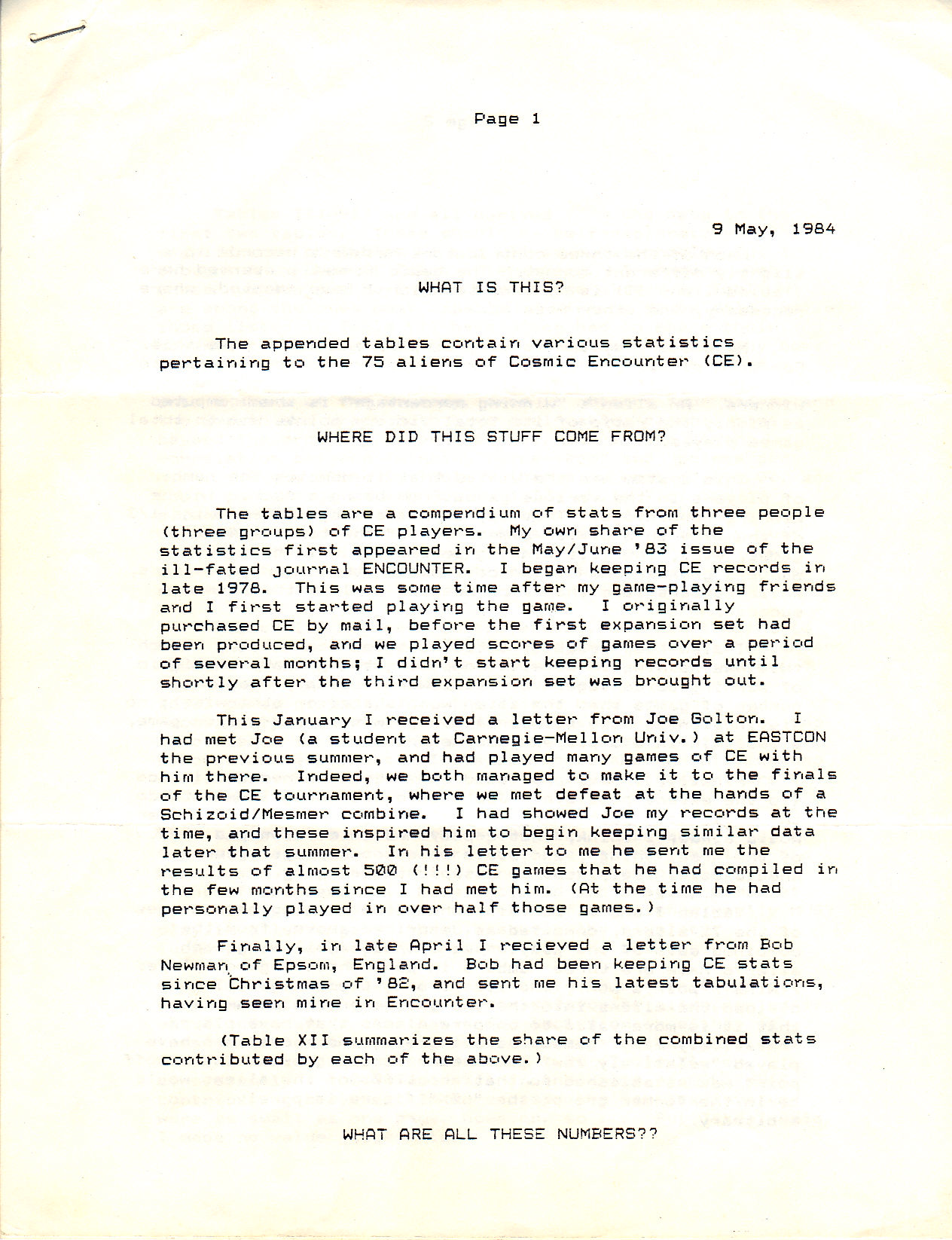 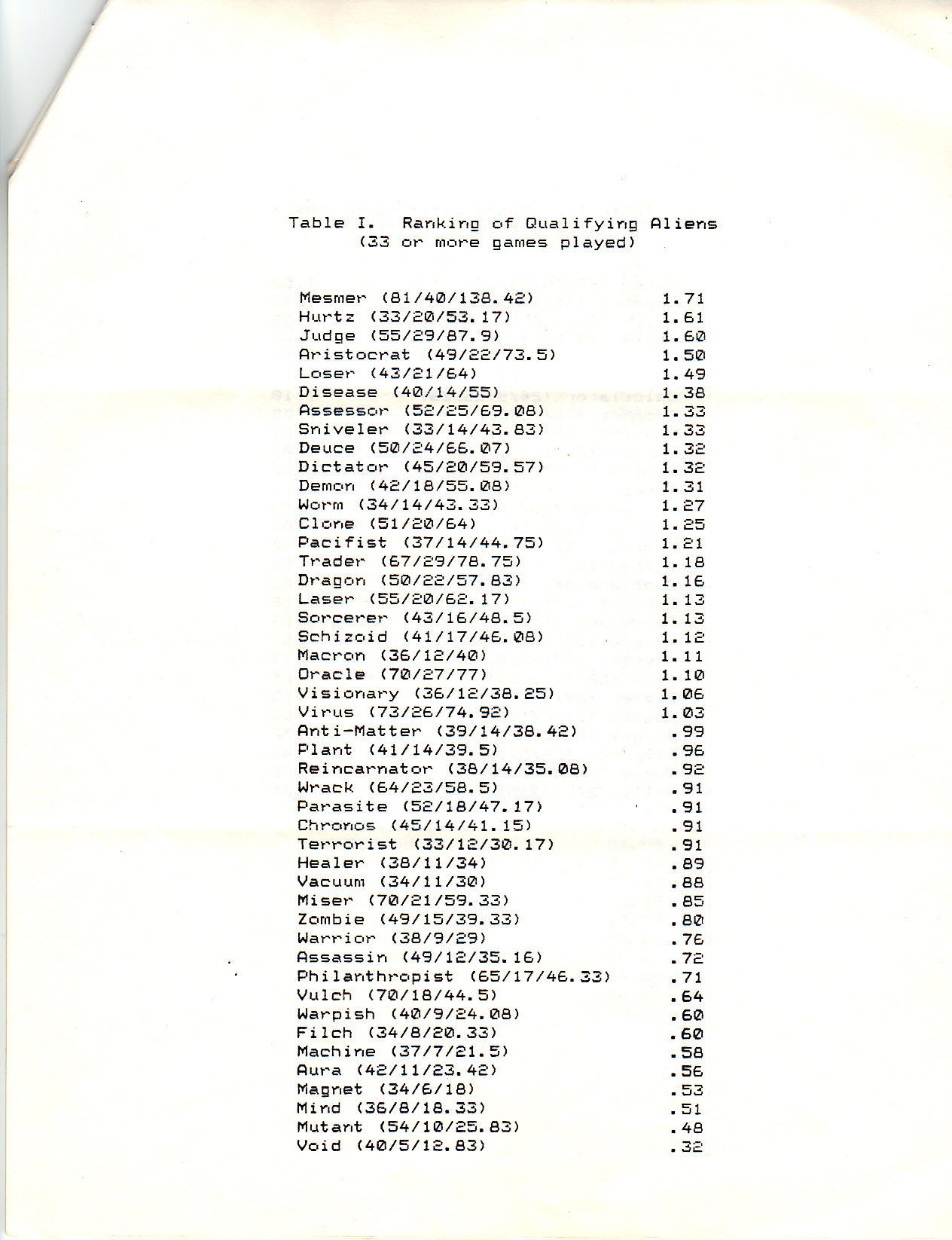 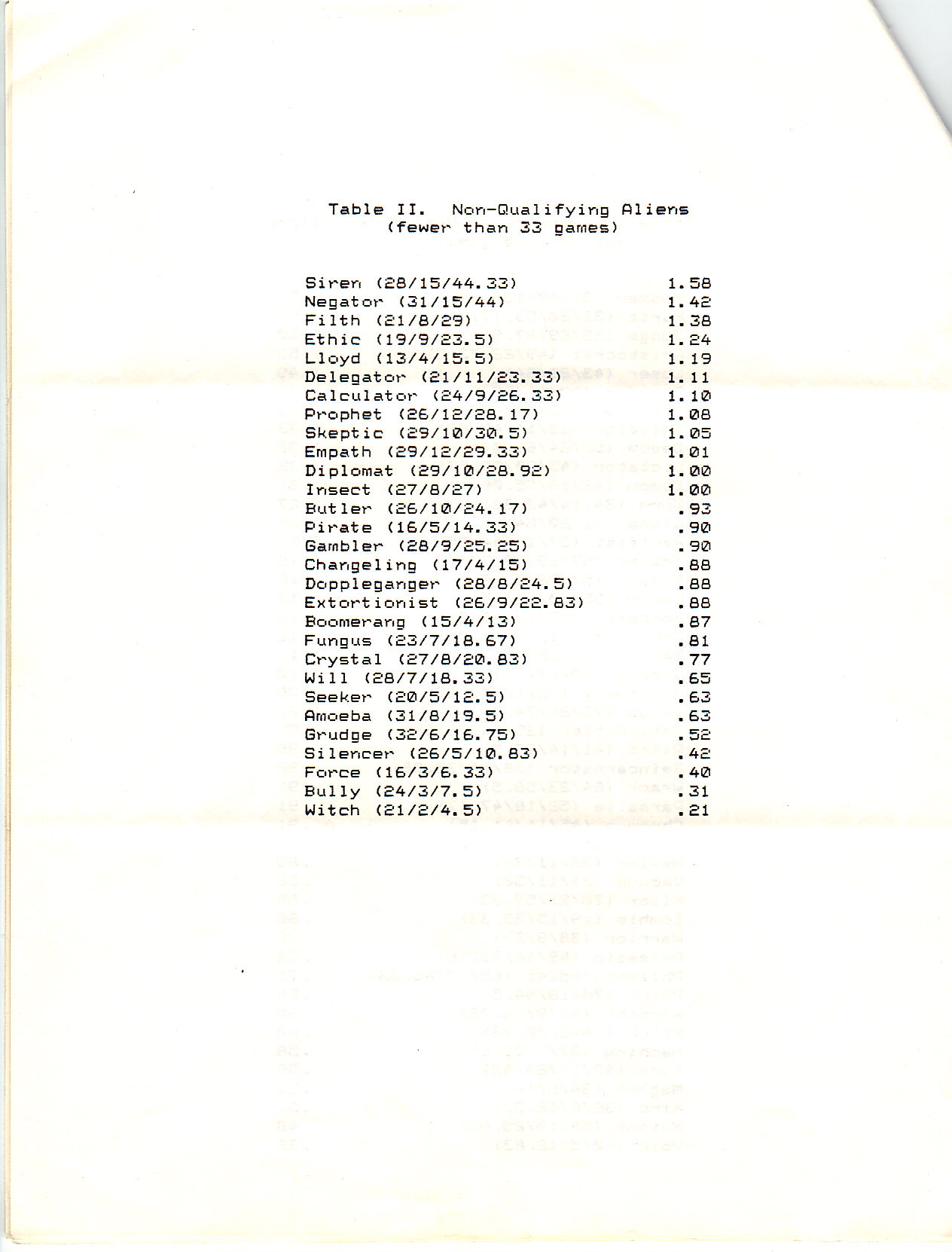 Not the answer you're looking for? Browse other questions tagged cosmic-encounter or ask your own question.

9
What are the differences between the oldest (EON) version of Cosmic Encounter and the newest (Fantasy Flight)?