Does newer card text on a Magic: The Gathering card override the old wording?

While going through the Gatherer database I noticed that the Alpha version of Icy Manipulator says,

{1}: You may tap any land, creature, or artifact in play on either side.

whereas the Tenth Edition of the Icy Manipulator says,

All versions of a card are considered to be equivalent and are played with the same text: this text is known as the Oracle wording of the card. From the comprehensive rules:

108.1. Use the Oracle(TM) card reference when determining a card's wording. A card's Oracle text can be found using the Gatherer card database at http://gatherer.wizards.com.

Note that a card's wording isn't always the most recent text on a card! There are a handful of cards that have errata of one form or another - for instance, Time Vault's Oracle text has changed numerous times, and it's still different in a few small ways from the card as printed.

As far as Icy Manipulator specifically goes, note that the wording on the Alpha (and Beta) versions isn't as different from the 10th Edition version as you might think; while neither uses the tap symbol, they both have the type 'Mono Artifact' which by the rules of the time meant that they were tapped as part of their usage (and thus could only be used once in a turn). Again, quoting from the comprehensive rules:

Mono Artifact (Obsolete) An obsolete term that appeared on the type line of artifacts with activated abilities that caused the artifact to become tapped as a cost. Cards printed with this text have received errata in the Oracle card reference to simply say "Artifact," and those abilities now include the tap symbol in their costs.

The Oracle is the official word on a card's text, unless this* is in play. 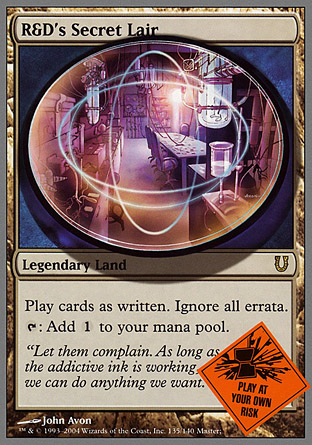 The Oracle text always takes priority over any card. I actually did not notice the difference in the two cards at first. I thought you were referring to "in play on either side" but it would make no sense to tap something that was not in play. Instead, you are referring to the cost of tapping.

Originally, you were required to tap mono artifacts in order to activate them. This means the cards are actually played exactly the same way. Pay the mana cost and tap cost (for either the older or newer card), and you can tap a creature, artifact, or land. The cost was simply updated because mono artifact cards were made obsolete. When they changed it to only being an artifact, the cost of tapping had to be added so it would be played the same.

Basically, whenever you have such a question, it is best to use the updated text because it is often more clear based on the current rules; however, if you have the time to access the Gatherer database, you should check the Oracle text because it overrides everything.

1
Does the old Howling Mine have an erratum?
13
Can you play older versions of cards in standard?
5
How do Mistform Dreamer and Conspiracy interact?

11
What is the correct creature type for Lesser and Greater Werewolf?
8
Can nonbasic dual lands such as "Azorius Chancery" be destroyed by the card text "destroy target land"?
3
Precise rules for MTG
3
Can Breath of Life Put a Discarded Creature into Play?
10
When can lands be tapped?
2
In magic the gathering can I tap a creature at the attacking/blocking phase?
1
Can I use Improvise to pay for activated abilities?
11
Why/how was Ajani's Pridemate ability made mandatory?
16
What was the first Infinite Combo in Magic: The Gathering?