Back in the day we didn't have Creature - Name card types, instead we had Summon - Name card types. Long ago in magic, cards were printed entirely differently, and this actually creates some interesting situations with the present day rulings. For example, in the past the Defender ability was non-existent. There were instead creatures printed Summon - Wall and such creatures with the Wall subtype were ruled to not be able to attack.

It's supposedly possible now with the introduction of Defender that such old walls without Defender can actually attack, drastically changing how some cards have been used.

My question is, if my opponent has such a card, Summon - Wall, or perhaps Summon - Goblin, etc., does that count in the present rulings as a Creature Card? Can I target it with "destroy non-black creature", or perhaps "return target creature to opponent's hand"? The confusion between my group of players is the word Creature is actually not on these cards, and it is on every other creature card that's out in this time and age.

Yes, these cards are MtG cards with the type Creature. A cards official wording is what currently appears in the Oracle Online reference.

From the Comprehensive Rules

108.1. Use the Oracle card reference when determining a card’s wording. A card’s Oracle text can be found using the Gatherer card database at http://gatherer.wizards.com.

Summon (Obsolete) Older creature cards were printed with “Summon [creature type]” on their type lines. All such cards have received errata in the Oracle card reference to say “Creature — [creature type].” (Many of these cards’ creature types have also been updated.) See Creature.

All of those cards have received errata in the official Oracle. If you visit Gatherer and look up any of those old cards, you can see the new wording for it. Many creatures gained subtypes, so it's worth checking into. For example, Llanowar Elves went from "Summon Elves" to "Creature - Elf Druid". Also, all Interrupts becames Instants.

Also, you'll find that all those walls will likely have Defender in the Oracle ruling :-)

Possibly not, if and only if R&D's Secret Lair is in play: 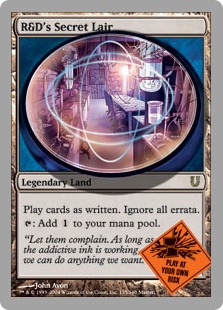 P.S. I was just about to correct "in play" to "on the battlefield" there, but actually I don't have to, since I have R&D's Secret Lair in play :P

8
Does Dormant Sliver mean Slivers can no longer attack?
9
Is Master of Arms pointless under new blocking rules?
1
Do creatures with Defender ability die?
2
Can Act of Treason allow a Detained creature to attack?
0
Does an attacking creature have to deal lethal damage to the blocking creatures before dealing damage to the other blocking creatures?
5
Is an old edition of Cinder Wall able to attack?
19
How does "it's still a land" affect a permanent that would not otherwise be lands?
4
Does setting a new type clear the rules text for non-lands?
1
Status of non-top mutated creature cards
1
Do cards like Cranial Extraction, Slaughter Games, and Memoricide get around protection?