Innistrad has a decent amount of archetypes that you can build. In draft, what tier 1 deck types exist?

Loosely speaking, I think strong Dark Ascension Limited (i.e. the official format, DKA-INN-INN) decks fit into one of three strategies corresponding to the three stages of play (which I have given these semi-descriptive labels):

Decks that don't do at least one of these -- such as a deck full of mid-sized creatures but no way to actually turn them into card advantage -- tend to be at a disadvantage. Note that there's a lot of overlap here, probably much more so than in Constructed decks. You really can't classify most cards as belonging to just one strategy. Instead, the goal here is to view the card differently, and prioritize it accordingly, based on your particular gameplan; and to adjust your gameplan and later picks based on your cards. Darkthicket Wolf is a primo aggro card and a good midrange card, for instance; your "Human Sacrifice" deck may turn into a more controlling deck if pick up a really good late-game bomb.

I've never drafted with the pros and I don't play MTGO (where you can draft til you pass out from exhaustion), so I can't speak for the subtleties of "tier 1" vs. "tier 2", but I can list what I've found effective. Names in quotes below are those that are widely used, to my knowledge; I've made the other ones up based on whatever described a deck acceptably. Colors are suggestions rather than set in stone; each archetype has good cards in some of the other colors.

These are decks that aim to win with an explosive start. Drafting them involves careful attention to your mana curve.

I think the top-tier decks in this category are:

These are decks that build up card advantage Jund-style. Dark Ascension has been good for this style of deck, with many of its premier cards having some component of built-in card advantage: Huntmaster of the Fells, Strangleroot Geist, Lingering Souls.

Some examples of good decks are:

These are decks that want to waste time until they can play something that trumps your stuff, like a big Spider Spawning or a Reaper from the Abyss. Basically my standard for determining whether a deck is "control"-y in Limited is "Will this deck ever want to cast Think Twice?" Control gains some defensive power in Dark Ascension with the addition of quality defenders like Headless Skaab and Nephalia Seakite, but it loses a lot due to pack dilution. In particular, the "Mill Yourself" decks -- like Burning Vengeance or Spiders -- are weaker in Dark Ascension because their key cards are less likely to show up now that you're drafting from 2 Innistrad boosters instead of 3.

So far, I think the most consistently draftable deck in this category is actually a rather boring one:

A previous question covered the major archetypes for Innistrad draft. Most of the information there is still relevant, as Dark Ascension hasn't dramatically altered the draft landscape for most of the core archetypes there.

However, there were two marginal strategies in ISD draft that have become significantly better with the addition of DKA, if you open the cards for them in your first pack.

Getting a dedicated mill deck in triple-ISD was chancy, but it was playable if the pieces came together. Adding DKA has made this a tier-1 strategy, so long as you get this: 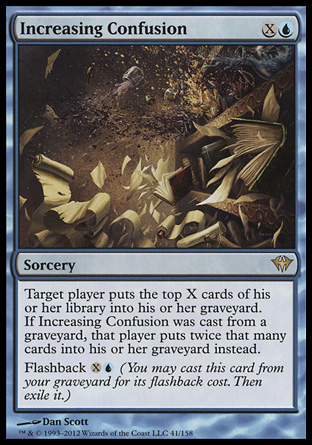 Increasing Confusion by itself can mill your opponent for 15 or more after you flash it back, and it's definitely first-pickable. If you get it in your DKA pack, you should strongly consider moving into a blue control deck with the rest of your picks. Take strong defensive creatures such as Armored Skaab, Fortress Crab, and Stormbound Geist, tempo-based cards such Silent Departure, Grasp of Phantoms, and Griptide, and additional mill components like Dream Twist and Curse of the Bloody Tome. If you get an Undead Alchemist in your ISD packs, you'll do a little dance, since that zombie is unplayable in most decks, but nuts in a dedicated mill deck.

Note that even if your U/x mill+control deck doesn't come together, you can still use Increasing Confusion as an alternate wincon in any number of other decks, or even a deck that's splashing blue.

Intangible Virtue was a late pick in ISD, simply because there weren't often enough tokens to make it worthwhile. But throw in DKA with Lingering Souls, Gather the Townsfolk, and Increasing Devotion, and it becomes plausible to have a deck that uses tokens for its primary creature base. This deck obviously wants every copy of Intangible Virtue and Midnight Haunting that it can get.

Note again that all of the cards above are perfectly playable on their own, and you don't have to have a "mono-tokens" deck in order for them to work. But the existence of these extra token generators makes a token-heavy white aggro deck an especially attractive choice in DKA draft.

10
What are the possible archetypes in Innistrad draft?

25
How many lands should I have in my sealed or draft decks?
10
What are the possible archetypes in Innistrad draft?
5
What's a good handicap for a less experienced player in an MTG Draft?
5
How much collaboration is reasonable for a Two-Headed-Giant draft?
21
Where can I practice MTG draft online and actually play against my opponents for free?
8
Archetypes in triple Avacyn Restored draft
17
Software to search for MTG decks based on a list of cards
7
How long should a draft round last by official rules?
1
In MTG Arena, does your “rank” affect what cards you can draft?