My friend was level 4, and tried to play his Doppleganger card against a Puckachu, which grants an extra level for defeating it, "without using help or bonuses".

'Help', apparently, only means other players, and 'bonuses' are weapons, armor, or potions. Bringing in your clone, according to him, means beating it yourself.

Nobody agrees. Is his interpretation correct?

"Helping" in combat is clearly defined as one and only one other player joining you in combat.

"Bonuses" are granted by Items (as can be seen from the James Bomb card FAQ entry), or the rule books example of Mace of Sharpness or a Race as in the Warrior ability below. For example, the Pretty Ballons grant a +5 bonus to either the Monster side, or the Player side. 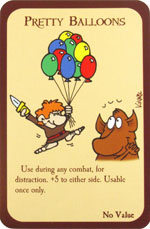 From the Munchkin FAQ:

Playing/using a one-shot Item during a combat that aids the munchkins (and not the monsters) does not constitute "helping" in combat, as described in the rules. This means that in any given combat, any number of players can play cards to aid or hinder either side as often as they want, as long as they have the cards. Only one other player can actually join the combat as a helper, however.

Q. Does a Psychic still get his +2 "fighting alone" combat bonus if he has a Sidekick? A. Yes. Sidekicks are okay. A Doppleganger is OK. And if another player throws a grenade or something to hurt the monster and assist you, you don't lose your bonus. It's only when another player joins the combat as your helper that you lose your bonus.

Q. James Bomb says to fight him with only my Level and not my items. Can I use non-item bonuses in the combat, such as those given from trainings? A. That sentence should read "Level only, no items or other bonuses." So, no, your non-item bonuses would not count. (This is official errata.)

If a Warrior had already discarded a card to get a +1 combat bonus, and then stopped being a Warrior, he would keep the bonus, but wouldn't be able to discard any more cards for the Warrior bonus.

From the Munchkin Rules:

Anyone can carry any item, but some items have use restrictions: for instance, the Mace of Sharpnesscan only be wielded by a Cleric. Its bonus only counts for someone who is, at the moment, a Cleric.

To fight a monster, compare its combat strength to yours. Combat strength is the total of Level plus all modifiers – positive or negative – given by items and other cards.