Bottom card drawn during epidemic: Are 3 cubes added to the city pictured, when the disease in that city's region has already been eradicated?

I suspect not, because the rule on Eradicating Disease states:

From now on, cards of this color have no effect when drawn on the Infector's turn. Take all of the cubes of the eradicated color and place them back in the box - they will not be used again for the rest of the game.

However, Epidemics do not occur during the Infector's turn, and the Epidemic rules state:

Take the bottom card from the Infection Draw Pile and add 3 cubes to the city pictured on the card, then place the card into the Infection Discard Pile.

There are more rules in this section but none of them clarify whether there is an exception.

So I don't know which of the two rules the game designers intended to take precedence. So I would like a definitive answer to the question: For the bottom card drawn during epidemic, are 3 cubes added to the city pictured, when the disease in that city's region has already been eradicated?

Further clarification isn't needed. Under the Eradicating a Disease section you quoted (emphasis mine), the rules instruct you to put the cubes away, they will not be used for the rest of the game.

If a cure for a given disease has been discovered and all of the disease cubes of that color have been removed from the board, ﬂip the Cure marker for the disease to the “Sunset” side. From now on, cards of this color have no eﬀect when drawn on the Infector’s turn. Take all of the cubes of the eradicated color and place them back in the box—they will not be used again for the rest of the game.

The only exception to this rule would be from the Pandemic: On the Brink expansion Virulent Strain card Hidden Pocket, where it is possible for a disease that has been eradicated to come back. 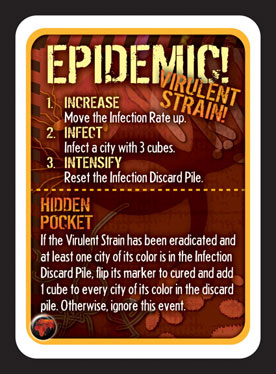 13
How exactly do cures affect future infection in Pandemic?

44
What are good general strategies for Pandemic?
15
Bottom card drawn during epidemic: What happens if there is already more than one disease cube in the city?
20
What are the chances of losing Pandemic on the first turn?
15
Pandemic--epidemics with eradicated diseases
5
Pandemic's difficulty seems to rest on the placement of the first epidemic card in the deck
6
Can you play an instant (airlift) to move quarantine specialist prevent infection after the infection card has been drawn?
5
How does infect step of epidemic interact with mutation?
8
Different color cubes in one city
6
When a city outbreaks when using the Malaria Historical Disease, does it create one or two outbreak cubes?