In Pandemic, do certain setup and card order combinations make it impossible to win?

My family has won most of the Pandemic (2 or 3 player games) we've played, but we ran into one recently that I thought impossible to win due to the 2 and 3 cube infections being far from Atlanta, far from each other, and not accessible with any of the cards we were dealt or received in the first few turns. We lost very early before we obtained even a single cure.

It would have been great if I could have recorded the exact initial setup and card sequence to see if a win was possible - but I didn't.

Has anyone done the work necessary to answer the question: Do certain setup and card order combinations make it impossible to win?

Here's an example of someone playing a game which they lost on the first turn: http://boardgamegeek.com/thread/373797/it-takes-talent-to-lose-on-the-first-turn

Maybe they could have done better, but if they had cards such that they couldn't treat anything in the black area then that would be the end of the game. Here's a full example:

Initial placement of cubes are three in Baghdad, Riyadh and Karachi, two in Cairo, Tehran and Delhi and one in Algiers, Istanbul and Moscow (i.e. 18 of the 24 black cubes are already on the board). 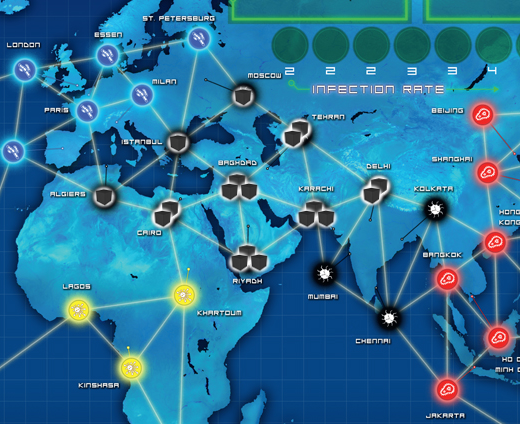 Four players, player 1 is Medic with Santiago and Beijing. The other players (Operations Expert, Scientist and Dispatcher) have no special events, and don't have Atlanta. The first player can't treat any cities in four actions, and picks up one city and one epidemic at the end of their go.

The epidemic city is Mumbai, the marker is moved up one space, and after shuffling the city cards Baghdad and Riyadh are drawn. These cause two large chain reactions with 18 outbreaks and requiring 45 cubes on the board - a loss by two methods.

Position after epidemic in Mumbai, and infection in Baghdad (outbreaks highlighted in green) 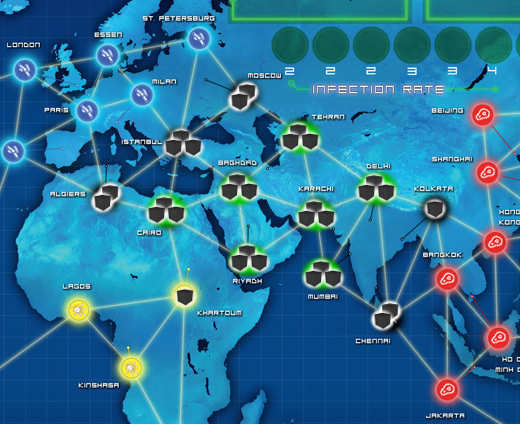 Position after infection in Riyadh 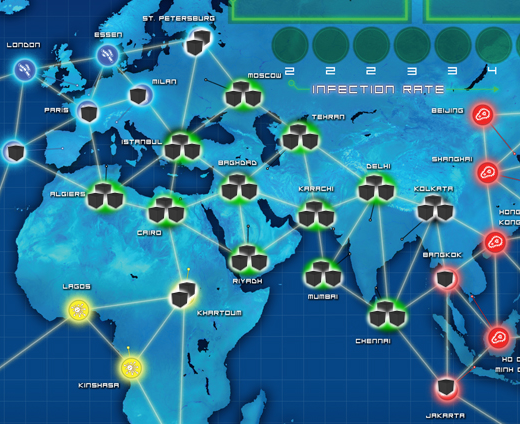 Pandemic can be a frustrating game at times. I think the author of the session review sums this up pretty well:

All that set-up, for less than a minute of game play!

While the accepted answer shows that it definitely is possible, it seems highly unlikely to encounter a situation where you can prove that no win condition is possible.

"I thought impossible to win due to the 2 and 3 cube infections being far from Atlanta, far from each other, and not accessible with any of the cards we were dealt or received in the first few turns."

It should be possible to reach just about any city with any set of cards in 2 turns. You just may need a little creativity. Remember that reaching any city that you have the card for allows you to go anywhere. Want to get to red but only have 2 blacks? Play one, walk to the other, and then use it to fly to red. Expensive, yes, but certainly not impossible.

And while having the cities with lots of cubes spread out makes them difficult to remove, it also makes them unlikely to cause chain reactions. So you don't have to drop everything to try to get to them right away. You can still win with 7 outbreaks, consider them a resource and "use" every one you can to get you closer to cures.

20
What are the chances of losing Pandemic on the first turn?

2
How many epidemic cards to use with the Bio-Terrorist challenge?
6
How to win 2 player Pandemic as Quarantine Specialist and Contingency Planner