Is Felray's ability global or local?

This lovely lady is Felrey, a mercenary from the new expansion for Twilight Imperium 3rd edition. 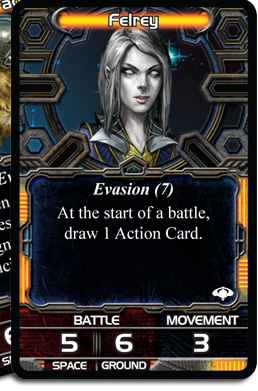 She's rather fast, but has limited evasion.

The question surrounds her special ability. Some of the mercs have global abilities:

The cost of technologic advancements is reduced by 1.

and others have local abilities:

When participating in a combat, assign one hit to an enemy fighter or ground force.

But this one clearly says:

At the start of a battle, draw 1 Action Card.

Does that mean that Felrey does not need to be a participant in that battle?

Mercs are very neat, and battle does not come cheap in any case. I haven't seen any errata or FAQ covering this, and if one goes with "rules as written", it seems to get an action card at the beginning of every battle, making this lady an interesting leech.

On the other hand, some players argue it as an "obvious thing" that she has to participate herself. Who is right?

Felrey's ability will only trigger when she is present in the combat.

From the section on P12 of the Shards of the Throne expansion rulebook "Using Mercenaries In Battle":

Any Mercenary abilities that work during battle may only be used if the Mercenary is participating in the Space Battle or Invasion Combat.

You could argue that "at the start of a battle" should not technically count as "during a battle" I suppose, but that sounds like excessive rules-lawyering to me!

1
Who choses the targets of the Exotrireme II's ability in Twilight Imperium?