What can I do to avoid being stuck being able to do nothing in Settlers of Catan?

My friends and I play a fair amount of Settlers of Catan (normally with 3-4 players). Sometimes I do well and sometimes I do badly; however, the most infuriating games are those where I'm unable to do anything for pretty much the entire game.

For example, in the last game with 4 players, I managed to (in total) build 3 roads and buy 2 development cards (a knight and a victory point). As the starting player, I placed my first settlement in a strong central position in the map with good access to both wood and brick. However, by the time everyone else placed their cities, I was forced to place my last city on the coast to get access to any ore, and I was left completely cut off from wheat (and my other settlement).

These sorts of games seem to come around reasonably frequently, which leads me to believe that it's something that I'm doing rather than just being something that happens every now and then.

I've read both How to start in Catan games? and In Settlers of Catan, how do you overcome bad initial settlement placement? and now always try to make sure I start with an initial placement that at least involves a good supply of brick and wood. However, I've found it difficult to get a mixture of all resources. For example, in the last game before this, I found myself cut off completely from ore, which seriously hampered my ability to buy cities and development cards.

What can I do to avoid getting stuck in these sorts of situations?

There are many ways to win at Settlers. The only type of starting position which limits your options is the one you described - good access to wood and brick but not much else, and then getting hemmed in. This situation doesn't happen too often in our group because the more experienced players usually dissuade newer or poorer players from placing an initial settlement that has a strong likelihood of leading to a disastrous outcome - which reduces the chance of a tedious game for all.

However, I've seen many poor starts in Settlers that ended in victory. I have two sections worth of thoughts for you describing the advantages of starting out behind, and the various ways I've seen players come back after a poor start.

The advantages of starting from behind: 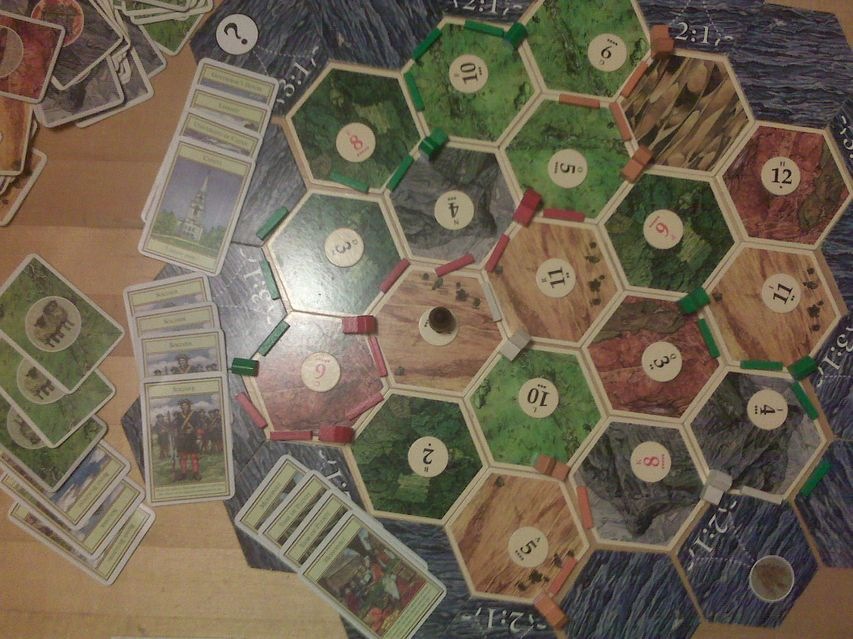 I'll contribute one suggestion: I don't think that prioritizing placements that offer brick and wood is a very sensible philosophy. Yes, those resources maximize your chances of coming strong out of the gates with early roads. On the other hand, dominating in the early game is only a small part of being good at Settlers of Catan. You're discovering that you often end up powerless in the mid-to-late game. I'd say it's very likely that your focus on early-game resources is contributing to this problem.

Suppose you grab two plum locations for brick and/or wood - if they're on opposite sides of the map, with other players in the way, your ability to connect your roads together will be severely hampered, maybe to the extent of cancelling out the advantage you gained from cornering road-building resources in the first place. And here's another thing: by apparently doing quite well in the early game with your wood, brick and roads, you strongly incentivize other players to do something to contain your position. Meanwhile, the player who is unassumingly building up a nice collection of development cards is probably actually doing better than you. Subtlety is a great virtue in Catan!

If I were you, I'd try aiming for abundance of resources and two placements that are harmonious with one another, in strong preference to this notion of "I mustn't do badly in the early game". I think you may find it reaps dividends, and even if you crash and burn a few times at least it'll provide you with some interesting new perspectives in ways to try and win the game.

First, the most important big strategy tip for Catan: there is no single winning strategy. You must adapt to the board and to your current circumstances. There are many possible successful strategies (e.g., roads + settlements; cities; or single resource + port), but trying to run a particular strategy in inappropriate conditions can easily lead to stagnation.

By the same token, there is no single essential resource. Getting production of a variety of resources is certainly very helpful, but in my experience, it's not worth giving up very much total production to get that. In the particular example you gave, you had one settlement that had good road production but was blocked in. In order to take advantage of your ability to build roads, I would want to place the second settlement somewhere with decent production (probably all the good ones were taken, but the coast is usually even worse) and room for expansion.

However, in my experience, when players stagnate, it is most often not a result of poor initial placement, but of mistakes in the early- and mid-game play. Here are two specific tips:

Another factor that can sometimes cause stagnation is bad dice rolls. If your production is concentrated on two or three numbers, and those number don't come up much, you won't be able to do very much. This is not necessarily bad strategy, just high variance: sometimes you will gets lots of resources, sometimes very little. A single game is not long enough for the randomness to reliably even out.

First seat is usually one of the worst places to be in my opinion. It will guarantee you the best and the lest desirable placements on the board. Every seat has different placement strategies associated with them but I will try to be more general.

Resources alone is not the only thing to consider on initial placement. Rolling ratios and good rolling ratio combinations are also critical to success. I tend to look with intersections containing 10-8-5 or 9-6-4 intersections as well as if they produce the resources to build roads and eventually cities. Even if you have a high ratio placement with similar resources (i.e. 2 wheat and one sheep on a 10-9-6) getting the resources will usually overcome the lack of the proper variety of resources. You have to have something to trade in order to trade is the point.

Even if you can place a second settlement on a port that has the resource (i.e. wheat port on a wheat hex with an 8) do not be tempted by it. Those placements will start producing only one card early in the game and make you a target to easily stunt your growth. You may want to consider a lower number placement but produces more resources.

There are many sites about placement theory which I would encourage you reading. I personally like http://www.settlers-strategy.com/settlers_of_catan_strategy_placement_1.html and have modified it to fit my play style.

Whenever someone wants to make a trade, tell them you'll give them what they're looking for in exchange for any two cards. I know a guy who has come from behind with this strategy so many times it's ridiculous. Everyone thinks they're just handing you their trash, but if you get enough of it it can still work out.

Sometimes there simply isn't anything you can do about it. There are a whole load of good suggestions on here, but actually changing the game through extensions can help somewhat, changes that I've found reduce this problem:

When looking at the board, you need to be able to identify which resources will be in demand, and where all the starting settlements will be. You might not be able to accurately predict which players will go where, but you should be able to identify ~9 spots for a 4 player game of which 8 will have starting settlements placed on them. The only thing to watch out for it when one location will block 1-2 other likely starting places, which can severely restrict the choice of the last player.

Unless you are going for the very unlikely 2City, 4VPcard+largest army strategy, you will want to take 2 settlements. Since you get 2 free roads, you should place these in a direction to get a new settlement. It is very important NOT to place your free roads towards a location someone else will probably place a starting settlement, as then you have wasted your free road! Place them heading out to the coast is normally good, as there is plenty of room for settlements on the coast while there will normally be very minimal room in the interior. It doesn't even matter if you get decent resources from your 2 settlements, they are VPs and allow more cities to be built for even more VPs. If they get you a port or more resources, then that's a bonus.

In your game, you went first which is probably the worse position to be in. However, you should evaluate where everyone else will probably go before placing your settlement. If you think you won't get access to both wheat and ore, then don't place your first settlement where you did, going for the best ore location is rarely a bad move! Then when you come at the end to place your second settlement, you are in the unique position of getting to go immediately afterwards. This lets you do cunning tricks such as placing it on a wood/brick location (even if poor numbers) to start with those resources, then immediately building a road which combined with your free one can be used to block another player's starting road for a race to a good location.

37
How do you place your initial settlements in Settlers of Catan?
41
Which resources are better at the start of a Catan game?
3
In Settlers of Catan, is there a transition/evolution between “building” and “development” phases of the game?
1
For a given development strategy, how do you ensure enough secondary resources?
18
Catan starting strategies — actual data?
3
What do the colors mean on Better Settlers?
10
Catan: Play any development card before rolling
4
In Catan, how do you decide which “fifth” resource to neglect?
2
Are there ways to estimate the value of development cards in Catan?