What cards can be used to cheat Eldrazi creatures onto the table?

I'm constructing an Eldrazi based deck and I'm thinking about possible ways of getting one onto the table. What I already considered:

I'm assuming you mean the "big three" Legendary Eldrazi -- Emrakul, the Aeons Torn, Ulamog, the Infinite Gyre, and Kozilek, Butcher of Truth. If you want any Eldrazi, like a Pathrazer of Ulamog, you can always use reanimation spells. These three, however, have the persnickety clause:

When {card name} is put into a graveyard from anywhere, its owner shuffles his or her graveyard into his or her library.

Thus, you have to use instant-speed reanimation, cheat on costs, or hardcast them normally using obscene mana acceleration (which is basically "cheating them out" for most intents and purposes).

The proven competitive decks that do this are:

If you're looking for a top-tier tournament deck, I recommend:

If you're looking for a deck to play at "casual" tables, my recommendation is a Windbrisk Heights + Summoning Trap deck. It's still very powerful but not as obviously "unfair" as the tournament combo decks — some players vehemently dislike seeing turn-3 Karn every other game — and the aggressive/midrange creatures give you a decent fallback plan even if the whole table is dedicated to hating out your combo.

* — The creature card is cast, so you get a free turn from Emrakul, the Aeons Torn.

All of these ways are how my deck works, and I have been able to Emrakul, the Aeons Torn on turn 4 multiple times; as well as being able to play Eldrazi left and right by turn 6 and quickly take control of the game.

I have a deck that uses Deathrender, which says:

Whenever equipped creature dies, you may put a creature card from your hand onto the battlefield and attach Deathrender to it. 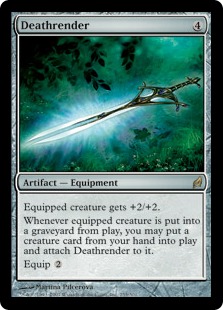 I might suggest trying Possibility Storm. Use it to find Emrakul and play him for free on turn 5. Or use Quicksilver Amulet to play him on turn 4-5.

I would recommend Belbe's Portal. 5 mana to play it, pick a creature type, then 3 and tap to put a creature of that type from your hand onto the battlefield.

You can make an Eldrazi + Cloudpost because Cloudpost will only double every time you lay one down. With all 8 locus lands on the field equals to 36 colorless land total.

13
Can Thraben Heretic be used on creatures with undying?
9
What happens if Genesis Wave puts Fists of Ironwood onto a battlefield with no creatures?
5
How can I used double-faced cards in casual play without checklist cards?
5
Can Aura of Dominion be used with Inspire Creatures?
8
What planeswalker cards can be used as commanders in the Commander format?
9
What cards give +1/+1 counters to all friendly creatures?
2
What state and trigger events apply when you "put creatures onto the battlefield?"
0
What is the strategy called which forces opponents to discard cards?