In Jenga, what happens if there are 2 blocks on the top of the tower blocking the way for the 3rd block?

I am programming a game of jenga however I have a problem where the player can place down 2 blocks on the top of the tower, and leave no room for a 3rd block? Is there any rule here to prevent this? Can the player push the top blocks to straighten them? 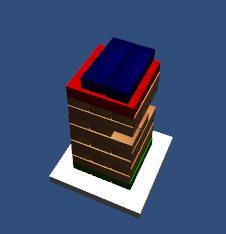 The player cannot take another turn because placing the next block anywhere on the top level will mean it will fall down. The player cannot start a new level either, because a level of the tower must be completed before progress

The rules on Hasbro's site say that you can touch other blocks with a single hand, and you must complete a 3 block story. I don't see why it would be unacceptable to either fix the top story with your hand directly to accept a third block, or nudge the top blocks in place with a block in your hand to complete the story. Clearly, if you are required to make a 3-block story, the blocks must fit across the top.

While stacking, always complete a 3-block story before starting a higher one.

You can touch other blocks to find a loose one - but if you move a block out of place, you must fix it (using only one hand) before touching another block.

This is a mass market game. The rules are written to be as easily understood as possible, not a game like Advance Squad Leader or Magic: the Gathering where the rules are written to close every possible loophole. The rules don't define what 'fix' means or 'out of place', but since you are supposed to create the top story with 3 blocks, those three blocks must fit on the story. The rules also don't prevent you from placing your top block perpendicular, but with nearly half the block extending over the edge of the tower, but I contend that a piece placed like that is "out of place" and is subject to the fixing rule. To fix a block is to move it back to its relative position in my mind. (Example: Top of the tower, center block.)

Several digital versions exist for iOS, Android, Wii, etc. You could always see how the rules were interpreted for those electronic versions and copy their behavior. The Official Jenga version for iPhone allows you to nudge any pieces you want during your turn to 'fix' them (or ruin them actually). The iPhone developers consulted with the original game designer Leslie Scott in the making of the game. In this implementation, a player could place 2 blocks on top to prevent an opponent from placing the third block of a story, but his opponent could just nudge those pieces on top to make room for his piece.

NaturalMotion Games worked closely with Leslie Scott, the inventor of Jenga, to create the most authentic Jenga experience ever.

“I’m delighted by how the team at NaturalMotion Games has so skillfully captured the essence and universal appeal of Jenga,  while adding new and thrilling dimensions to my original game.” – Leslie Scott

Having slept on this issue (sleeping on Jenga - ouch) I've decided to change my previous answer.

The rules state you must "stack the block on top of the tower at right angles to the blocks just below it". I would contend that "stack" does not simply mean "place" - or else the rules would have used that word. Looking up a definition of "to stack", you will generally discover something along the lines of "to neatly arrange".

In terms of Jenga, neat arrangement must imply the sort of three-by-three formation that the tower starts from. As such, I would say that if you leave your block haphazardly on the top of the tower, you have failed to stack it and cannot be considered to have completed your move.

Your scenario is therefore easily resolvable - just request of the previous player that they tidy up the top of the tower before the next player starts their move.

I will say that I have played with many people whose idea of a fun game of Jenga move is to destabilise the tower as much as possible before passing the go on. While I would describe this as outside the spirit of the rules as plainly stated in the rulebook, I don't see much wrong with a house style of "screw-you Jenga", where anything at all is fair game in the course of a move, as long as one block is taken from somewhere in the tower and left somewhere at the top of the tower at the end. However the consent of all players to play in this mode should probably be obtained beforehand...

Placing the blocks on top is not usually part of the "fun" of Jenga. For this reason all digital implementations of the game that I have seen have always just let you pick 1 of the 3 legal spots and automatically placed the tile leaving room for others

9
What are the official rules of Jenga?
5
What is the proper way to set up a Jenga tower?
6
What is the tallest Jenga tower ever created?
8
What is the mass (or density) of the average Jenga block?
2
In Jenga, how do we define the "highest completed layer"?
3
What's name of of this Jenga game?