Looking for the name of a 2d6 game

I remember a simple but interesting dice game, I remember the rules but I don't know its name. I would like to know its name to be able to look up stuff about it.

It is played with two 6-sided dice. The score of a throw is the two-digit number built from the two results, the higher number first, except when the two dice roll the same, these are worth more. For example, 32 is beaten by 51 which in turn is beaten by 22 (double-two).

The players (usually 3, 4 or slightly more) take turns throwing both dice but hiding the result, and announcing it loudly. The next player has to say a bigger score than the previous one (except for a double-six, which, if I remember correctly, can be played on a previous double-six), regardless of his own result. A player, before throwing his own dice, has the possibility to claim that the previous player lied. This, and only this, ends the game. If the previous player told the truth, he wins, if not, the one who exposed him wins.

I hope this is enough to accurately identify the game :)

It's a variant of Liar's Dice.

The variant in question is, according to Wikipedia, called Mexican or Mexicali, and is typically a drinking game. My preference is for Mexicali.

Other liars dice variants are typically 5 dice, not two, but the play's much the same.

It's Mexicali and a company made a pretty cool version of it for retail with a pirate theme. It's called "Dead Man's Chest" and comes in a small wooden crate with two D6 with a skull and crossbones for the "1" side as well as a bunch of small gems and reference cards that list the hierarchy of the possible combinations. 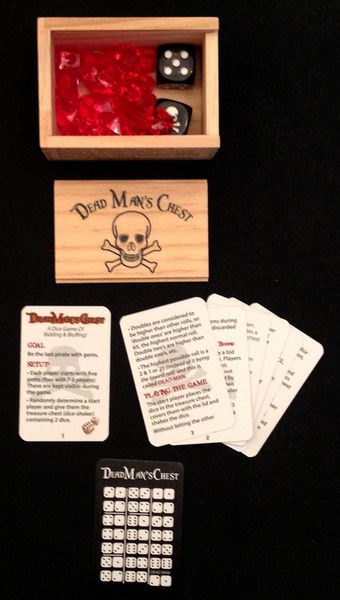 Each player gets five gems and loses one each time they get busted lying. It's a fun way to play if you aren't drinking and the wood crate is a nice touch as you shake it and then just slide the top back to peak at the dice.

3
Name of empire building game with negotiated alliances?
4
Looking for a card game about auerochs
5
Card game with jokers and set completion
6
Does this have an official name and rule set?
9
Looking for name of very old board-type game
4
Identifying a word-guessing game based on the players' role
8
Can you identify this “memory” card game with 3 secret cards, lowest score wins
2
“Guilty!” is the name of this game I'm looking for?
1
Michigan Rummy? Incorrect Name?