Recently I discovered the Decktet playing card pack, and have been enjoying the way that suits and ranks combine to make for some very clever games. However, I think I would be able to use better strategies if I could remember what cards existed!

I have noticed that the basic deck contains one card of each rank/suit combination, and that the extended deck contains two pawns and two courts of each suit, along with The Excuse.

I was wondering if there was some further logic behind the card arrangement, or some easy way to remember that there is, e.g., a nine of moons/suns, an eight of moons/suns, but no seven of moons/suns.

I don't think there is any particular logic to the suit distribution in the Decktet. A quick search of BoardGameGeek didn't turn up any comments by P.D. Magnus (the designer of the Decktet, who is active in their forums) on the distribution either. I haven't been able to commit the distribution to memory, but if you want to, this is what you would need to memorize: 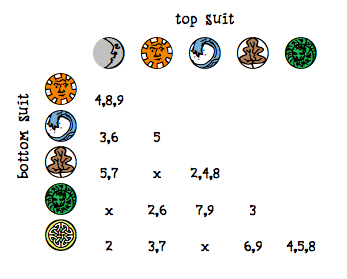 These are taken from the Decktet Charts and tables pdf available here.

Another useful view of which combinations of suits are most prevelent: 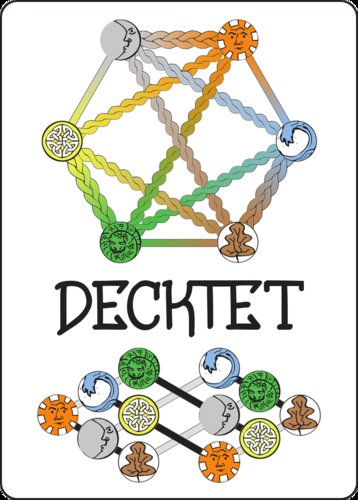 This is an image by HenryBlatbugIII from BoardGameGeek.

Not the answer you're looking for? Browse other questions tagged decktet .