How can I play Somnium in real life?

The computer game Civilization IV allowed large scale user customisation. One of the largest and most detailed of these game mods is the community-based Fall From Heaven II.

Within the mod, it is possible to play a card game called Somnium against your AI opponents. A game in progess looks like this: 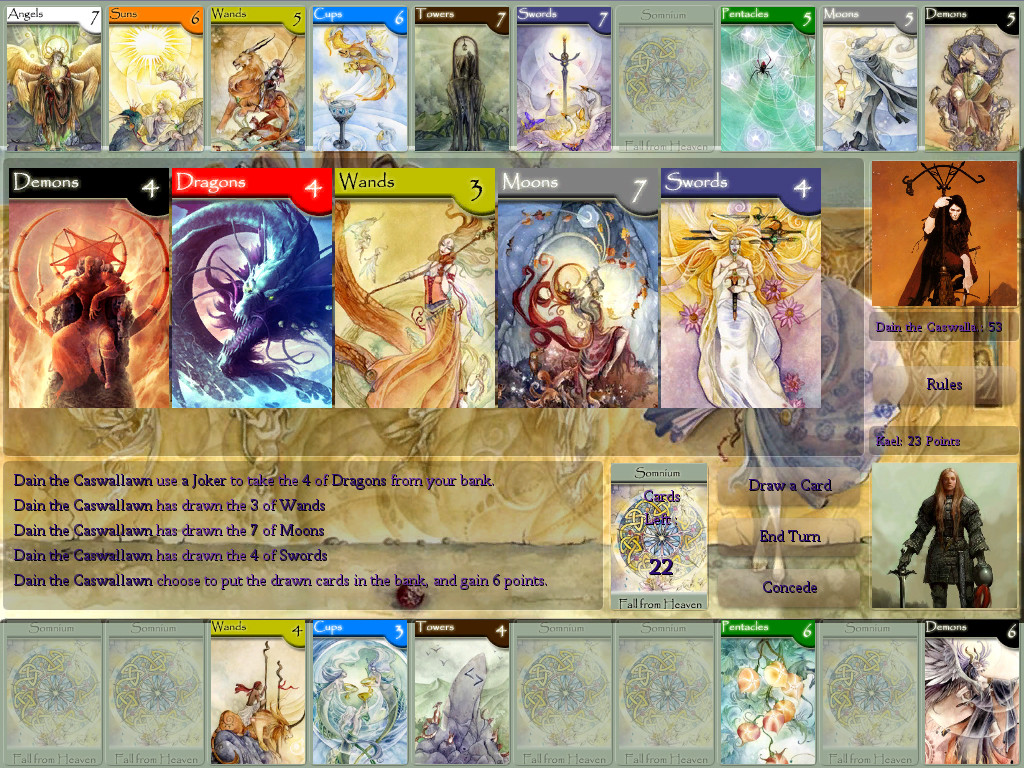 The game is simple but addictive, and the cards are beautiful.

Does a real-life implementation of this game exist? Ideally, I'm looking for a deck of cards with the same artwork and numbering as the computer version, but I'm also interested to know if the game mechanics are implemented anywhere else, perhaps under a different name.

Ok, so I did a little research about the game. Here are the results. Hope this helps. Sorry about the long post.

Here you can play simple Flash version against AI, but I guess that's not really what you are looking for. However, If you get your hands on 8 suited card deck (for example here or here). You can even make your own 8 suits deck combining standard card deck and jumbo version with the identical back. Just an idea.

If you're looking for a game with similiar feel, user called Ooops mentioned on BGG that it reminds him of the game Can't Stop (you can try the game online on BGArena):

The developers have even designed their own card game from scratch, (...). Called Somnium, it features amazing art and a push-your-luck gameplay in the vein of "Can't stop".

I've looked through forum discussion about the cards artwork in Somnium.

the artist for the somnium cards is actually using the art for a deck of Tarot cards. she is planning on releasing the deck in 2010 i believe.

In the same discussion you can find a link to the ZIP file with JPEG Cards (the graphics are small unfortunately, 160x240px) from the FFH2, with "numbering". You can also find there a PDF file with card graphics (low quality). I guess you could print those and glue them on cards from one or two standard decks with the identical back. Or you could glue backs as well. On the other hand, you don't need to glue them, you could simply use card sleeves. Many options here.

However, I don't know how much of the original art is available online, but you definitely should have a look at both artist websites.

As game designer stated in the mentioned forum discussion:

There are a few pics from Jason Engle in there. But most of them are from the amazing Stephanie Pui-Law.

Cards are in much better quality, however they don't have Somnium numbering and game-relevant info, frames etc. You would need to do that yourself, apply it on the artwork, and then back to the printing aptions.

What you can also find on the Stephanie Pui-Mun Law website is information about buying Tarot deck in question. I would strongly suggest to look here first, as it is the best answer to your question I can get. You can buy this Tarot deck on Amazon.com.

I guess you could buy a deck and glue necessary numberings on them?

This doesn't answer your question, but can give some insight about the game for those users who know nothing about it (as did I until I saw game's artwork in your post).

In a popular mod for the fourth installation of the Civilization game series, Fall From Heaven II, there is a funny on-the-side minigame, Somnium, which is played with a deck of 54 cards; 3-7 in ten suits (Angels, Devils, Pentacles, Staves, Suns, Moons, Towers, Dragons, Swords and Cups) as well as three "Fool" cards and a "Death" card. The objective of the game is to gather cards so that your set of highest-of-each-suit sum beats that of your opponent, and you and your opponent each takes one turn at a time at drawing cards; You turn one card at a time and can "bank" the cards at any time, but if you hit the "Death" card or turn up two of the same suit, all drawn cards are discarded. The "Fool" cards allow you to steal a card from the opponent. o You can win a minor diplomacy bonus towards leaders by besting them in a tournament game, but will suffer a likewise relation penalty by losing such a game.

Part of an interview with the game designer, Derek "Kael" Paxton:

Soren: I enjoyed trying out Somnium, the card-based, diplomatic mini-game you recently added. Because the game encourages thinking about probability, I would like to try a version of it where all drawn cards are shown, including the ones underneath the top “banked” cards. Considering that humans are so bad at estimating probability, I don’t think that revealing more information would hurt the game. (To mix things up, you could also remove five randoms cards each game.) Why did you decide to build Somnium, and how was it designed?

Derek: Fall is a huge mixture of options that tie together in a variety of ways. I wanted Somnium to be the opposite, only one decision, but a lot of complexity in it. I didn’t want there to be a right or wrong answer but instead to simplify the risk/reward mechanic down to one yes-or-no choice.

I thought about showing the “banked” cards but, in the end, it got cut because I wanted the interface to stay simple, and I wanted the player to be running off of instinct and laboring over the choice. If we let all the banked cards show, the player who drew the 3 of swords could see all the other swords cards banked and would know that he should draw again. I wanted to avoid that certainty.

As to why it was designed, we like doing things no one else has done, things people don’t expect from modders. Functionally, it offers a nice break in long games if you want to jump in and play a few games against the AI or play while your waiting for other players in a multiplayer game.

Kael (the lead behind Fall from Heaven and Somnium) went to work with Stardock and they recently implemented a modified version of Somnium as an iOS game. They also released a PDF with high-resolution images for the cards on their website - though these are not the cards that Stephanie drew.

These points, and some further details are provided by Kael himself in this post.

Not the answer you're looking for? Browse other questions tagged somnium .