Years ago I played a game similar to Ricochet Robots, but a single player travel version.

This game has a small board (something like 5x5 tiles) and several robot pieces. It includes cards with puzzle configurations (about 100 I remember) that the player should solve.

The mechanics of the game are similar to Ricochet Robots (or a Zelda ice and blocks puzzle), where you move a Robot in one direction until it collides with another element. The objective is to get the robot to a selected position on the board.

I don't remember the name nor the company that made this game but I want to try it again. Does anyone know it?

Here's the game I think I was thinking of: LUNAR LOCKOUT 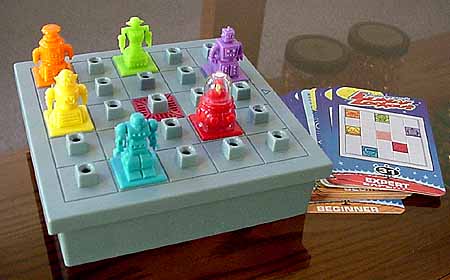 Here's how one of the reviews describes it:

This is a great little solitaire game. It's quite similar to Ricochet Robot in theme, but there are some important differences. There are no walls--not even around the edges. You must get your man to the center solely by bouncing him off robots. The goal-spot is always the red square in the center. Instead of random board and piece placement, you must solve puzzles as provided on cards. If you think these differences would make it more simple than Ricochet Robot, then you're in for a big surprise. The puzzles, especially at the top levels, are tear-your-hair-out difficult. Solutions are thankfully provided on the backs of the cards, but that's cheating. The components are very high quality. The robots all have their own 'look' beyond being different colors. The base of the board slides out nicely, has storage space for the robots and cards, and snaps together snugly. My only complaint is that I'd like to see an expansion set soon with new puzzles to solve.

Not the answer you're looking for? Browse other questions tagged identify-this-game puzzles or ask your own question.

10
What is this game, played with chess board and pieces, but with totally different rules?
6
I'm looking for a card game with a deck of noun cards and a deck of occupation cards
9
Looking for name of very old board-type game
2
"Guilty!" is the name of this game I'm looking for?
3
Searching for Plant Growth Board Game with Stacking