Are there times to pre-empt with a “strong” six trumps in bridge?

Suppose you have something like AQJxxx of clubs (and no other values). If it were any other suit than clubs, I'd open with a with a "weak two" bid.

But two clubs is the STRONG two bid. Meaning that if I wanted a "weak" two bid, I'd have to go to THREE clubs. With such a strong honor holding, is it ok to do so with only six clubs, on the theory that your suit is actually stronger than a seven card suit such as QTxxxxx? (If your partner has nothing, you figure to win five tricks, going down four, but your opponents can make a small slam.)

Would you do this with another suit besides clubs, where you could bid a weak two? And how would vulnerability affect your answer.

To decide whether or not your bid is sound, start by considering the scoring: 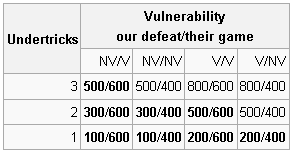 Next, consider how many tricks you'd be likely to make with your longest suit as trumps. With your AQJxxx of clubs you'll probably take 5 tricks.

Under most circumstances, I wouldn't. If your partner has 3 or 4 clubs and mediocre strength, and decides to support, you might find yourself in a disastrous 4CX or 5CX while your opponents didn't have anything better than a game.

The only rule about preempts is "Don't make a preempt your partner won't expect". Have an agreement with your partner, and stick to it. What that agreement is is (almost) irrelevant; it is certainly less damaging to your results than violating the agreement.

I play duplicate, and mostly matchpoints. So read this with that slant. Although I will note that even at IMPs, very aggressive preempts are common even at the top levels, because they work.

At rubber, remember the golden rule of preempts: You are deliberately paying to extend the rubber. If you're playing with the weakest player at the table, the job is to get out as cheaply as possible and cut someone better, not pay a premium to continue longer. S.J. Simon's Why You Lose At Bridge is just as right about that as it was in 1946 when he wrote it.

If your agreement is "7 cards, hopefully to an honour or two, and no more than half a defensive trick outside", then more power to you! You'll get a lot of +170s that the room bids game on, and the odd -500 into nothing, but the opponents are figuring out what to do at the 3 level when the room gets to open 1 a lot more, and they will not bid as well on average - and -100 for 3D-1 scores really well when other tables' opponents know to matchpoint double after the competitive auction, or get to wrap up 110 in 2S.

In particular, 3C (and 3D in systems with a conventional 2D call) are frequently very aggressive. They're "only as preemptive" as 2S, so these pairs treat them the same as 2S (even though, if doubled, it's down one more). If it works for you, go for it! If it doesn't, don't! (see below for my almost reverse of this decision).

I play very sound preempts with one partner, because she's one of the best card players in the city, and expects to win by taking one more trick than the field on the play and on defence (frequently doubled).

My agreement with my other regular partner is "3C or 3D opposite an unpassed hand will not feel guilty putting down dummy in 3NT. 3H or 3S, especially NV, is anything goes." (within the context of "anything goes" 2-bids and NAMYATS 4-major)

I've even played a system where your example of CAQJxxx is too strong for a 3C bid.

If I have to play with a new partner at the last minute (which as a club TD I am frequently called on to do), I ask 4 questions, and hope to muddle through the rest. One of them is "what's your preempt style?" It's that important to be on the same page.

I'll end with a link to a discussion on another site about preempts. Note especially the thread at the bottom, from a English International player (my emphasis):

was opened 3D, first seat, favourable vulnerability at 4 of the 5 tables in the English trials. The fifth opened it 4D.

The point about a pre-empt is precisely the lomg suit. If you bid on a 6-card suit more than once in a blue moon you are misleading your partner (who can be expected to have an opening bid in your example, and may bid up, based on your 7-suit); if you do it often, you are misleading your opponents, and should declare your 'system' in advance.

Opening 3 Clubs on this hand is a disaster waiting to happen. If your partner has a singleton Club and an Ace there is every likelihood the opponents can't make game on their 29 HCP, but you are going down 2 or 3 (probably not doubled, but turning a plus into a minus).

A key maxim for expert bridge is:

You are taking a huge flyer here, that is predicated not only on partner having absolutely none of the remaining 6 controls, but 2 or 3 Clubs as well. That is a very low odds proposition even in 3rd seat.

Now consider the delightful case where partner is strong, with 3 little Clubs. With the Club King missing, partner will completely misread the odds of Clubs being a no-loser suit in slam. Another disaster waiting to happen as you are the only pair in the room going down in 6C or even 7C.

Defensively, you are also advertising to opponents which way to side a NT or slam contract to avoid Club losers.

Finally, many pairs reserve opening preempts in 3C and 3D for weak suits and open a gambling 3NT with a strong long minor instead. Why is that? because opening 3C or 3D gives the opponents a lot of information but doesn't really preempt them much.

In conclusion, just don't do this. It's really bad bridge.

Not the answer you're looking for? Browse other questions tagged bridge bidding or ask your own question.

3
Why Do People “Pre-empt” With Seven Of A Suit In Bridge?
1
Why Is Two Clubs the Preferred “Strong Two” In Bridge?
7
In Bridge, Does It Make Sense to Pre-empt in Fourth Seat?
2
In Bridge, what are “proper” responses to a “strong” 2 club bid?
5
Are there times when a hand with a seven card suit is too strong for a three level pre-empt?
1
Do you need more to “pre-empt” with a major, than a minor suit?
4
How does one evaluate a hand responding to a “strong” two clubs?
3
Is“ third seat, favorable vulnerabilty” the only appropriate time to pre-empt with “any seven” of a suit?
1
Are there viable alternatives to a “three level pre-empt” with a good seven card suit?
3
Do most good pre-empters do so within “tight” point ranges?