Will using Nephalia Smuggler save a creature targeted by a destruction spell? 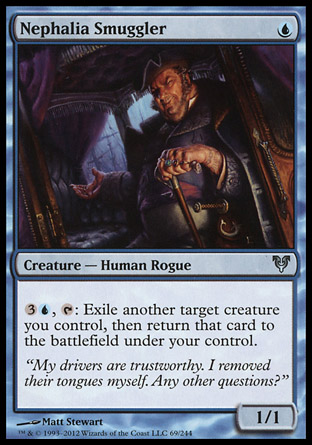 If the spell only has one target, it will be countered on resolution since the creature it was targeting no longer exists.

The answer to your question depends on the exact wording of the "destroy spell". What happens depends on if the spell targets, and on if it still has legal targets as it would resolve. If it has targets and all of them have become illegal, the spell is countered. Otherwise, the spell continues to resolve, doing as much as it can with its remaining targets. [CR 608.2b]

400.7. An object that moves from one zone to another becomes a new object with no memory of, or relation to, its previous existence. There are seven exceptions to this rule: [None of the exceptions matter here.]

608.2b If the spell or ability specifies targets, it checks whether the targets are still legal. A target that’s no longer in the zone it was in when it was targeted is illegal. Other changes to the game state may cause a target to no longer be legal; for example, its characteristics may have changed or an effect may have changed the text of the spell. If the source of an ability has left the zone it was in, its last known information is used during this process. The spell or ability is countered if all its targets, for every instance of the word “target,” are now illegal. If the spell or ability is not countered, it will resolve normally. However, if any of its targets are illegal, the part of the spell or ability’s effect for which it is an illegal target can’t perform any actions on that target, make another object or player perform any actions on that target, or make that target perform any actions. The effect may still determine information about illegal targets, though, and other parts of the effect for which those targets are not illegal may still affect them.

If the only target of the spell was the creature that Nephalia Smuggler exiled, then the spell would be countered on resolution. (Note: fizzle is now depreciated, and is no longer used within the context of the rules. It used to appear in older versions of the rules for historical reasons, but only in the Glossary.)

608.2b If the spell or ability specifies targets, it checks whether the targets are still legal. A target that’s no longer in the zone it was in when it was targeted is illegal. ... The spell or ability is countered if all its targets, for every instance of the word “target,” are now illegal.

The creature that is on the battlefield after Nephalia Smuggler's ability resolves is a new Object. The spell that was targeting the old creature is not targeting this "new" one.

400.7. An object that moves from one zone to another becomes a new object with no memory of, or relation to, its previous existence. ...

There are two possibilities. If the opponent's spell had multiple targets, it would resolve but would be unable to affect the creature that was exiled by Nephalia Smuggler (it would still have any other effects on the card). If the opponent's spell only had a single target, the creature that was exiled, then the spell would be countered on resolution and would have no effect. From the Basic Rulebook (page 10):

The creature exiled by Nephalia Smuggler left the battlefield and went to a different zone. When it did this, it became a new object, and hence this "new" creature it isn't being targeted by your opponents spell.

3
Can the Mask of Avacyn be targeted by spells after being equipped to a creature?
8
Do you have to choose a target for a spell, or can you just cast it with no target and let it fizzle?
2
How do continuous effects interact with the stack, your hand, and other zones?
3
Can an illegal target that will become a legal target before the spell resolves be targeted?
4
Will countering a spell that left the stack still trigger abilities?
18
Can a spell fizzle because a cost-reducing effect is removed?
1
Intentionally Fizzling Mandatory ETB Effect
4
Golden Guardian removed before death related trigger
1
Can I remove the targeted creature in response to Lukka, Coppercoat Outcast's -2 ability?