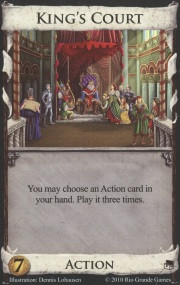 The rules are clear on the basics of what happens here: you pick three cards and play each one three times. My question is when, precisely, the picking happens.

If all three of those cards must be picked before executing any of them, it's a whole lot different from if you choose the cards one at a time.

You must choose all three cards before playing card #1 three times.

You choose card #1 and play it three times, then choose and play card #2, etc.

We played it one-at-a-time since that seemed like it made a little more sense (and was more fun too). If the first card you choose draws any cards at all, you have a high probability of picking up another action card to be the second target.

Anybody know for sure which method is correct?

Short answer: You do the "one at a time" option as you described.

This case is precisely identical to the more common question of using Throne Room on a Throne Room, as the two cards are worded identically except for the number and a "you may".

You completely resolve playing the Action the first time before playing it the second time. If you Throne Room a Throne Room, you play an Action, doing it twice, and then play another Action and do it twice; you do not resolve an Action four times.

In your case, this means "completely resolve playing King's Court the first time before [starting to] play it the second or third time". This means that yes, if your first Courted action was a Smithy, you're going to have lots of choices for the second and third King's Court.

"one at a time" is correct.

There's really nothing confusing about this or any card if you just read it simply and literally without adding any made up external ideas.

You may choose an Action card in your hand. Play it three times

Joe is incorrect about his application of supposed "rule against impossibilities". There is no such concept in Dominion, and I can think of about a dozen other ways this idea could be misapplied. In the case of King's Court, the word "may" renders such a hypothetical (and incorrect) rule irrelevant, so let's say we are talking about Throne Room instead, which requires that you play an action.

In Dominion is perfectly legal to play an action (or even choose something) that is impossible. Any impossible instructions are simply skipped. Thus the supposed "rule against impossibilities" is refuted directly by the rule book:

The player may still play an Action card even if he is not able to do everything the Action card tells him to do; but the player must do as much as he can.

You may pick any choice offered, even if you cannot do what it tells you to, but once you make a choice, you must complete as much of it as you can.

Other similar confusions based on supposed "rule against impossibilities":

Opponent plays Torturer when there are no curses left. "Rule against impossibilities" suggests you must discard 2 cards. Correct answer: You may choose to accept the curse, then smile and say "oops, guess there aren't any".

Opponent plays Torturer when you don't have any cards. "Rule against impossibilities" suggests you must take a curse. Correct answer: You may choose to discard, then smile and say "oops, guess I don't have any" (actually you probably wouldn't be smiling in this case).

Throne Room with no action seems like it would be disallowed by "rule against impossibility", but it is not. You just play it and nothing happens. There are various reason you might want to do this, such as cheaper Peddler.

Bottom line: The rules in Dominion are very well designed (I've yet to see any ambiguities or contradictions in any of the sets). Everything is perfectly clear as long as you read the rules and the cards carefully and literally. Do not add foreign ideas from law school or other sources. In the real world we need lawyers because the law is packed full of ambiguous and contradictory laws. Dominion does not require lawyers, thanks to the brilliant designers!

As an exercise, I recommend reading the rules with the following in mind: the notes in the right hand margin are redundant (in a good way) clarifications which you should be able to deduce from the main text (as long as you don't let your mind get muddled by external ideas). Similarly, the "Kingdom Card Description" section is also redundant. Make sure every statement in that section is obvious to you from the card text and main rules.

In almost every game, when the rules do not specify otherwise, it is safe to assume that the designers meant for effects to be handled in a stack-like fashion. M:tG codified this in their 6E rules.

I am going to have to go with the up-front option. I must disagree with the logic used in previous postings. In the study of law there is a rule called the rule against impossibilities. The game rules are clear that you must have 3 action cards and that each action card is resolved individually. However, you create the possibility of an impossibility where you are able to play a king's court/throne room with the anticipation of drawing the necessary action cards. For example, say I have in my starting hand just 3 actions, 2 king's courts and some additional action card. Even where the action card allows me to draw several cards there is the very real possibility that you will not draw any additional action cards. I do not believe that the game creators would have intended someone to play a hand in hopes that the hand will be a valid hand only to find that it wasn't. This creates problems of either knowing what cards you are going to be drawing or shuffling cards into a different order, and by consequence potentially negating the effects of other players' cards (i.e. the bureaucrat).

Anyway I full expect people to disagree. If you do find a flaw in my logic please let me know so that I can adapt my game play accordingly.

29
How does Intrigue change your general Dominion strategy?
19
In Dominion, how do Duration cards interact with King's Court / Throne Room?
22
Dominion: what happens when I play Throne Room on a Feast since Feast gets trashed when played?
5
What happens when playing Throne Room / King's Court *twice* with Caravan?
9
What does Masquerade do when you have no cards in hand, library or discard?
4
Procession and Throne room interaction
7
Band of Misfits and Throne Room
4
Dominion Prosperity play out treasures
6
Why does the effect of Enchantress not stack in Dominion?
0
Dominion - Kings Court on Tragic Hero