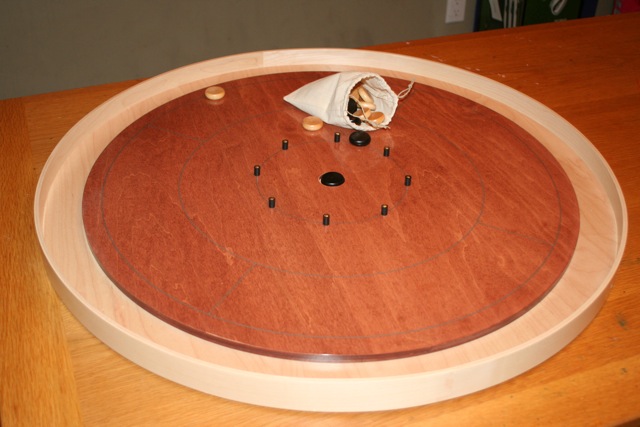 Board dimensions vary with a playing surface typically of polished wood or laminate approximately 27 inches (690 mm) in diameter. The arrangement is 3 concentric rings worth 5, 10, and 15 points as you move in from the outside. There is a shallow 20-point hole at the center. The inner 15-point ring is guarded with 8 small bumpers or posts. The outer ring of the board is divided into four quadrants. The outer edge of the board is raised a bit to keep errant shots from flying out, with a gutter between the playing surface and the edge to collect discarded pieces. Crokinole boards are typically octagonal or round in shape. The discs are roughly checker-sized, slightly smaller in diameter than the board's central hole, and often have concave faces to reduce sliding friction. Alternatively, the game may be played with ring-shaped pieces with a central hole.

Crokinole is most commonly played by two players, or by four players in teams of two, with partners sitting across the board from each other. Players take turns flicking their discs from the outer edge of their quadrant of the board onto the playfield. Shooting is usually done by flicking the disc with a finger, though sometimes small cue sticks may be used. If there are any enemy discs on the board, a player must make contact, directly or indirectly, with an enemy disc during the shot. If unsuccessful, the shot disc is "fouled" and removed from the board, along with any of the player's other discs that were moved during the shot. When there are no enemy discs on the board, many (but not all) rules also state that a player must shoot for the centre of the board, and a shot disc must finish either completely inside the 15-point guarded ring line, or (depending on the specifics of the rules) be inside or touching this line. This is often called the "no hiding" rule, since it prevents players from placing their first shots where their opponent must traverse completely though the guarded centre ring to hit them and avoid fouling. When playing without this rule, a player may generally make any shot desired, and as long as a disc remains completely inside the outer line of the playfield, it remains on the board. During any shot, any disc that falls completely into the recessed central "20" hole is removed from play, and counts as twenty points for the owner of the disc at the end of the round, assuming the shot is valid.1 Scoring occurs after all pieces (generally 12 per player or team) have been played, and is differential: i.e., the player or team with higher score is awarded the difference between the higher and lower scores for the round, thus only one team or player each round gains points. Play continues until a predetermined winning score is reached.

Does the Crokinole playing surface material really affect the gameplay?