Star Wars: Imperial Assault is a 'One vs Many' style board game that uses the same base rules set as Descent 2.0

Imperial Assault is a strategy board game of tactical combat and missions for two to five players, offering two distinct games of battle and adventure in the Star Wars™ universe!

Imperial Assault puts you in the midst of the Galactic Civil War between the Rebel Alliance and the Galactic Empire after the destruction of the Death Star over Yavin 4 with two separate game experiences. The campaign game pits the limitless troops and resources of the Galactic Empire against a crack team of elite Rebel operatives as they strive to break the Empire’s hold on the galaxy, while the skirmish game invites you and a friend to muster strike teams and battle head-to-head over conflicting objectives.

In the campaign game, Imperial Assault invites you to play through a cinematic tale set in the Star Wars universe. One player commands the seemingly limitless armies of the Galactic Empire, threatening to extinguish the flame of the Rebellion forever. Up to four other players become heroes of the Rebel Alliance, engaging in covert operations to undermine the Empire’s schemes. Over the course of the campaign, both the Imperial player and the Rebel heroes gain new experience and skills, allowing characters to evolve as the story unfolds.

Imperial Assault offers a different game experience in the skirmish game. In skirmish missions, you and a friend compete in head-to-head, tactical combat. You’ll gather your own strike force of Imperials, Rebels, and Mercenaries and build a deck of command cards to gain an unexpected advantage in the heat of battle. Whether you recover lost holocrons or battle to defeat a raiding party, you’ll find danger and tactical choices in every skirmish.

Multiple expansion boxes and individual Ally and Villain Figure Packs are available, which include more figures, abilities, cards, and missions that expand the game. 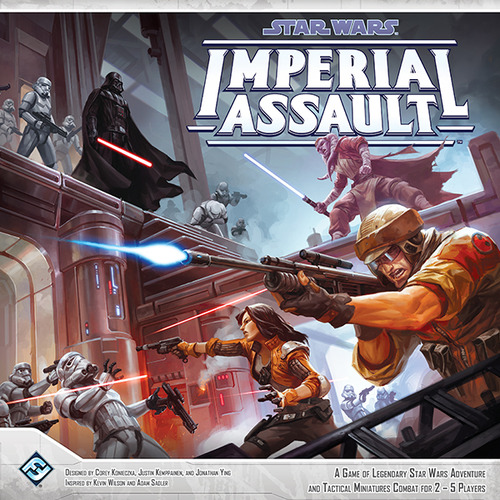 In Star Wars: Imperial Assault, what information should be revealed to the Rebel players in the campaign?

Can allies interact with mission tokens?