When would you buy the Thief in Dominion?

The Thief card rarely seems to be of much use, even when my opponents have bought a lot of treasure. Rather than stealing treasure, it seems much better to buy treasure to directly get to the high powered cards that will win the game. Often this card will actually help my opponent by stripping the copper out of the deck.

In what circumstances is the Thief card worth purchasing?

Thief is a specialty card. It improves a lot with the number of players. That and opponent treasure-density are the big factors in deciding if you want a Thief. Almost never buy a Thief in a 2-player game, but there is potential in a 4-player game. (Though honestly, even then it's still rare to be useful.)

There are 2 major drawbacks and one minor drawback to thieving:

Thief is a mid-game card, but due to the copper-trashing it's actually bad in the early-game. This is unusual, it's about the only card that can do nothing for you while helping your opponents. You must wait until other players have trashed most of their coppers to get a Thief. However, if you wait too long, your odds of hitting a treasure in a greened deck get slimmer (though stealing a Gold late in the game can make it hard for your opponent to get the last Provinces.) Furthermore, late in the game you might not get a chance to see any of the treasure you steal.

You don't want a Thief unless people have high treasure density: both trashed their copper already and started getting bigger Gold/Platinum. I don't really think it's worth it if Silver is the best you'll get. You also don't want a Thief if people are using action cards for money. Markets, Minions, Conspirator chains, etc. -- forget the Thief.

There's obvious synergy with cards that let you control the top of your opponents' decks (e.g. Spy/Scrying Pool). They can make a Thief much more effective. Additional treasures are also cards that could make you want a Thief. It's great to steal a Harem toward the end of the game, and Venture, Bank, etc. are nice additional targets.

We should compare Thief to Noble Brigand, which has been called in some forums a "fixed version of Thief". This isn't accurate; both cards were designed before the base set was released, they're similar but different, much like Laboratory and Hunting Party, or the different varieties of Village. Thief can steal/trash Platinum, Harem, Hoard, Fool's Gold, and all the other non-standard treasure, whereas Noble Brigand can only steal Silver/Gold. If someone is trashing coppers and buying Hoards, it might be time for a Thief. Mint/Fool's Gold is an excellent 5/2 opening, but a Thief could put a stopper on that. However, for general use Noble Brigand is better because it doesn't suffer from Thief's biggest drawback: trashing Coppers; it actually does the opposite, giving coppers if no treasure is revealed, which is nice for slowing engines. And it gives you $1. And it activates on purchase. (I do wish Thief had some of those buffs. Even with the $1 and the instant activation it would still seem underpowered.)

If I were to pick a set of Kingdom Cards to make Thief as good as possible, I would want it to be a long game, so the Thief has time to steal and see the rewards, so it would definitely have Platinum/Colony, and probably a Curser (maybe Sea Hag?) to keep things slow. There has to be a trasher or 2 to get rid of coppers, but nothing too effective--again, keeping things slow. Moneylender would encourage trashing of Copper while allowing players to skip Silver and go straight to Gold. Spy is also a good enabler. But we also want to be stealing interesting treasures! Thrown in some of the nice Kingdom treasures like Venture, Bank, Harem, and things start to look good. Maybe throw in Silk Road to make the Harems extra tempting.

*@Neal pointed out that it goes through opponent's decks, and thus they might miss a card they wanted. Going through someone's deck is usually seen as a con, because for most of the game they're buying cards that make their deck better, so reshuffling sooner gets those new cards in their hand sooner. I would consider this a con for Thief.

Depending on your group's style, a popular strategy may be what is known as "Big Money", which involves mostly ignoring "cool" cards in favour of mostly buying money and then Provinces wherever possible. Tragically, this line, which is very dull to play (and to play against!) is quite powerful, at least among groups of players who are still getting good at the game.

The Thief provides a useful safeguard against Big Money strategies becoming too dominant. If people at your table are doing little but stocking up on Silver and Gold (perhaps trashing their Coppers as they go), then the Thief is really going to ruin their day. If you are plagued with these accountant-like money-grubbing players, then consider throwing Thief into the initial card mix and giving them something to think about!

See also this question for further discussion of Big Money in Dominion and counter-strategies for dealing with it...

The thief is good when the opponents' decks are filled with gold and platinum, and they are trashing their coppers themselves. Treasure Map can make thief a lot more useful, as well as Bureaucrat and Explorer or any other card that adds more treasures to the deck. Stealing your opponent's Potion before they can use it can also be choice.

In an action heavy spread thief isn't very good as you tend to not hit treasure much.

You highlight many of the pros and cons of Thief yourself. It's true that early on, it's more likely to hurt you through the opportunity cost of having a silver, and may help them by stripping copper.

However, what about later in the game? One common thing for many dominion strategies is to keep decks small, copperless, and gold heavy. An opponent with a deck like that is the perfect target for thief. Getting a gold when you're slightly behind on VP can make all the difference, and it can ruin an opponent's engine, perhaps fatally, in situations where it's be difficult to rebuy the gold.

There is one other thing that should not be missed. The Thief, like all attacks that force discards, cause the opponent to lose the opportunity to play those two cards in that shuffle. You can deny someone a card they've really been looking forward to playing that they spent a lot of time buying, at least for a time.

Thief is great if your opponent plays a heavy-trashing strategy and then goes for money (Chapel-ing away Coppers is a great way to make yourself vulnerable to Thief).

In general, though, Thief seems to function best as a deterrent—if Thief is on the board, you might want to rethink your Big Money strategy. But you're right that it's a weak card in many games, and it can actually help your opponents more if you are not smart about playing it.

As of the Second Edition, released in 2016, Thief was actually removed from the game, largely due to being too weak to be worth it.

However, as of the Renaissance expansion that was released in 2018, there is a new and potentially strong use for Thief: 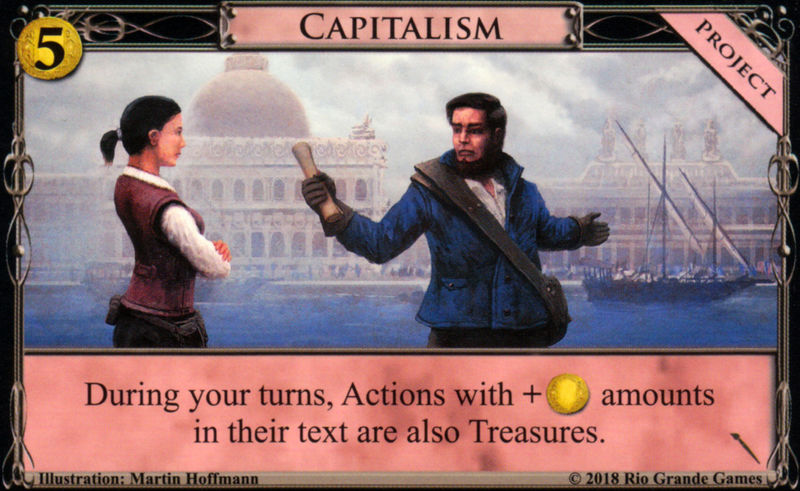 If you have purchased Capitalism, then Thief can steal a lot of really good cards from your opponent.

Not the answer you're looking for? Browse other questions tagged dominion or ask your own question.