What is the Card type of “Emblem Sorin, Lord of Innistrad”?

What is the Card type of "Emblem Sorin, Lord of Innistrad"?

mtgmint lists it as Creature but I am not 100% certain. 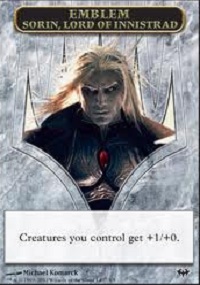 It's not a real card. It's basically a token.

113.1. Some effects put emblems into the command zone. An emblem is a marker used to represent an object that has one or more abilities, but no other characteristics.

113.3. An emblem has no characteristics other than the abilities defined by the effect that created it. In particular, an emblem has no name, no types, no mana cost, no color, and no expansion symbol.

113.5. An emblem is neither a card nor a permanent. Emblem isn't a card type.

The type is Emblem, more info on Emblems is available here. This particular emblem can be created by Sorin, Lord of Innistrad. Basically, an emblem is a reminder of an effect. So far, there are no ways to interact with emblems once they are created.

Not the answer you're looking for? Browse other questions tagged magic-the-gathering mtg-emblems or ask your own question.

17
Can I cast a spell while another spell or ability is resolving?
2
How to play a planeswalker such as Sorin, Lord of Innistrad?
1
What is the card type Phenomenon and Ongoing?
5
Is there any way to remove an emblem?
2
Card for changing the type of lands in the library
8
What happens when both players run out of cards with Gideon of the Trials and an emblem in play?
6
Does the Tribal card type have inherent mechanical implications?
0
Clarification on how the emblem gained by Tibalt, Cosmic Impostor works