Are there any resources available for building custom battle decks?

I work with a group of people who frequently like to play table top games and the like during lunch hour, and I've been wanting to play some M:TG. The problem though, is that

I'd like to build a few decks that can be played in a two-headed giant format, where the decks are as balanced against each other as possible... Also wouldn't mind having a card list for 5 good star format decks for when we have 5 people.

Is anybody aware of any sites that have such card lists? I can't come up with a google search query that proves promising.

I would buy enough of the Duel Decks for each player to have one. Even though each set is not balanced against the other sets, they are going to be the best value you will find for pre-built decks from wizards. They have a very reasonable power level for the most part.

Wizards is releasing the older duel decks in December as part of an anthology- it might be worth waiting for that, depending on your timeline.

Once you you have played with them a few times you might want to supplement the decks with a booster pack or two, or cards from your existing collection.

One reason I suggest these instead of building your own is that there's no way to see what decks you could really build with the cards & budget you have without going through your card pool and building the decks myself. I also find that having a base deck that is not packed full of great cards really lends itself to learning how to build fun decks by tweaking the existing deck.

Good idea about the star format. I really enjoy the tension that having the mixed enemy/ally groups provides. For some playgroups it is valuable to have a prescribed target so that people don't get analysis-paralysis trying to decide who to attack.

Of course you can always try getting your feet wet with Cube-like settings (and it can be incredibly fun), but trying to crunch constructed decks from a limited pool is something I wouldn't necessarily recommend, as it's all but guaranteed to have any balanced results. In general, card-by-card construction is something I'm skeptical about for beginners, balancing and pricyness being not even the main reason:

At least to me, customizing your deck to suit your personal playstyle is a main factor in what makes MTG so intriguing; simply baking up a set of cookie-cut decks might make for consistent (albeit not necessarily fair) matchups, but pretty much removes that aspect entirely.

On my cap, the best steppingstone regardless of what format you aim for would be the preconstructed intro packs or duel decks - I'd recommend the latter, as they typically pack more punch for their money, and are specifically built to go up against another. This is where you come in - get a hold of the decklists for the packs currently available, talk to your friends about which aspects they'd like to see more of in your games, and which pack would best meet that.

Each of these give each player a playable base to learn the curves with, and to tweak and improve upon for themselves by adding or removing certain cards - which is again where you, as the one with the card-pool and experience, can help them out, or they themselves might want to expand their repertoire.

Once everyone has a deck to play with, all that's needed is

Two-Headed Giant being something you're already familiar with, here's a multiplayer variant for 5+ players, perfectly fit for quick lunch-time games, a format dubbed "Bad Neighbour" by our local playgroup. It's a setup that can be played with any number of players, really, but it's best suited for groups of 5. Here's how it looks like: 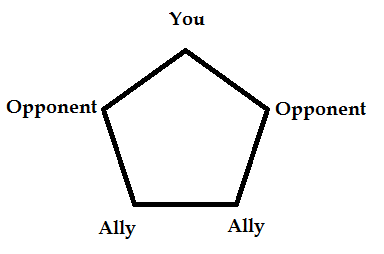 The player to the left and the player to the right (your "neighbours") are your opponents. Those two players (and planeswalkers they control) are the only people you can attack. It is your goal to get rid of these two by whatever means.

The two players on the other side of the table are your allies. You cannot attack them, and they can't be targeted or affected by any effect aiming for an opponent (example).

The first player to have both of their neighbours eliminated is the winner.

The big advantage this has over free-for-all is that "Let's all kill Jeff first, he has the strongest deck!" kind of scenarios aren't possible, and games are typically shorter, making them less of a pain for those who fail out early. It's a rather diverse experience too, since simply switching seats makes for a whole set of new matchups. It also offers a less cramped gameflow than the classic 5-star, as you won't have the two players trying to bring you down consecutively take turns, but rather get to to your own thing between the two, allowing everyone to play a lot more offensively.

In summary, it's pretty much the best setup I know of for when there's a lot of players, but only little time.

Not the answer you're looking for? Browse other questions tagged magic-the-gathering deck-building .

9
Are there vector graphics available of the mana symbols of magic?
5
Are multicolor decks in any color combination viable in modern Magic?
2
Are there any good intermediate deck building resources available in magic
1
Are there any nonland Plains?
0
Are there any cards that can boost my gate deck
7
Are there any artifacts that tap for white, blue or black mana?
8
Is there data available on the relative strengths of the World Championship decks?