Dungeons and Dragons Lords of Waterdeep: Which piece is the Ambassador and which the Lieutenant?

There are two special Agent-like pieces in Lords of Waterdeep: the Ambassador, obtained temporarily by assigning an agent to the Palace of Waterdeep, and the Lieutenant, obtained permanently by completing the quest Recruit Lieutenant.

In the box, there are two pieces clearly meant to be used to represent the Ambassador and the Lieutenant. One of them is a yellowish-white and the other appears to be unpainted light brown wood.

At the bottom of page 4 of the rulebook, it's indicated that the Ambassador is represented by the yellowish-white piece and the Lieutenant by the unpainted, brown, wooden piece, as shown in the image below: 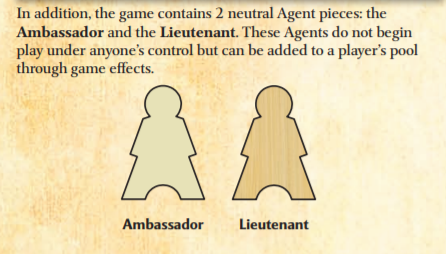 Not the answer you're looking for? Browse other questions tagged lords-of-waterdeep or ask your own question.