In a standard 3x3 Tic-Tac-Toe board, there is a strategy to win if the opponent makes a mistake. As far as I know, the strategy goes like:

I'm looking for a common strategy which works for all NxN board variants. Is there one?

The variant has the same rules as the standard one. All squares in a diagonal, row, or column occupied by a player is a win. And of course, if there isn't any moves to make, it's a tie.

Optimal play on NxN boards where you need N in a row leads to a draw for all N > 2.

Contemporary Combinatorics, by Bela Bollobas has a proof of it. Below is a summary of this. The images below are from this book.

For example, in the 5x5 game, optimal play for player 2 involves playing in the space with the same number as that played by player 1. If player 1 goes in the center, or if the matching space is already occupied, player 2 can go anywhere. 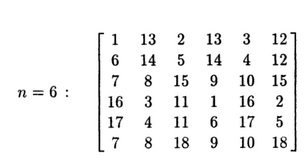 So, under optimal play, there is no winning strategy.

However, if you want to write a good strategy, it seems the thing you want to do in general would be to play pieces that give you as many options to win as possible. This would be central locations at the beginning and locations that are part of multiple lines of your pieces in the mid-game and late-game. Early game, I'd go for spaces on the optimal move chart where the blocking move is the furthest away. Late game, I'd go for moves that win the game or block winning moves, and otherwise ones that give the most options in conjunction with existing pieces.

There are several generalizations to tic-tac-toe. The most natural one (imho), is the m,n,k-game, which is the game of k-in-a-row played on an (m,n) board.

In (n,n,n) games, for n>2, the second player can force a draw. See m,n,k-game for many other results.

Not the answer you're looking for? Browse other questions tagged variants combinatorial-game-theory tic-tac-toe .