The rulebook says in the "Consume" section:

Each consume power can be used only once in a consume phase. Some powers allow multiple goods, “up to” some number, to be discarded, with each good producing an effect. Such powers must be fully used, if possible, when invoked. 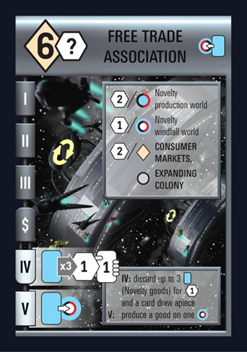 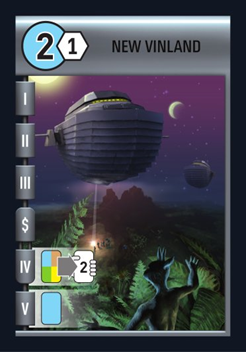 If the rules intention was to forbid that, they would say instead of "Such powers must be fully used, if possible, when invoked" something to the effect "Such powers must consume as many matching goods as the player has, up to the specified number".

Did I get this right? I'd like an authorative source, please.

You are reading too much into this rule. “Fully used if possible” can also be understood as “used as much as possible”.

Now, let's assume your interpretation is the correct one. Using the boardstate you described minus the New Vinland. You could consume only one good (or even 0 by arguing that it is not more than 3), which is against the spirit of the rules (you must consume as much as possible).

So, while I do not have an authorative source, I can say that your interpretation is not the intended one.

Not the answer you're looking for? Browse other questions tagged race-for-the-galaxy .

4
Consume>Trade in RftG Base game
7
Good produce/consume strategy in RftG
8
How to mitigate the intial luck factor in Race For The Galaxy?
9
Is Consume-Trade on Alpha Centauri always a good start?
4
Do you need military power when using the Rebel Sneak Attack to settle an additional military world?
9
What Happens During the Consume Phase In Race for the Galaxy If you have no consume powers?
0
Does Alien Fuel Refinery count as having a trade power in Race for the Galaxy?
5
Pilgrimage World with Consume 2x action--how many points?
2
Does military power accumulate in Race for the Galaxy
1
When using prestige bonus during two player, can I choose Consume VPx2 as my second action?