How do Phenomenon cards work in the Eternities Map variant?

In the Eternities Map variant of Planechase, players lay out Plane cards in a grid and get to choose a direction when they planeswalk: 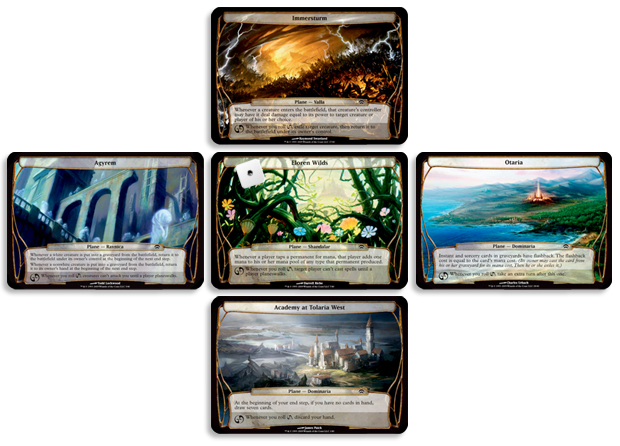 Players see not only the current plane, but also adjacent planes they can go to.

Planechase 2012 introduces the new Phenomenon cards as part of the planar deck -- for example, Interplanar Tunnel and Spatial Merging.

How do Phenomenon cards work with the Eternities Map? Specifically,

I would like to see authoritative official rules, but house rules (with design justification) are also acceptable.

What I've been doing is to leave the Phenomena on the board and treat them as warp tunnels. When traveling to a phenomenal you encounter the phenomenal and then continue in a straight line to encounter a new plane (which may or may not have been visible).

In the absence of any official article, here are my current house rules:

Include phenomenon cards in the planar deck, as normal. As a rule of thumb, the deck should include at least 25 actual planes.

Players "encounter" phenomenon cards when they are revealed from the planar deck -- put their triggers on top of the stack immediately. In most cases, this means that the phenomenon will be adjacent to the current plane. After resolving a phenomenon, place it on the bottom of the planar deck and continue revealing plane cards until all spaces are filled as normal.

Spatial Merging gets errata to read "Place both of them in the same slot on the planar map" instead of "Simultaneous planeswalk to both of them."

My main guiding principle for these house rules was that phenomena are random, one-time events, so it was aesthetically unappealing to have them sitting in a spot, waiting to be triggered. Because they activate when revealed from the deck, moving to a known square can still have additional unforeseen consequences (e.g. Morphic Tide or Chaotic AEther). I like that phenomena only occur when exploring the edges of the map: they are surprises that afflict planeswalkers venturing out into unknown reaches.

Overriding the unique "encounter" keyword allows all current phenomenon cards work as written, with the exception of Spatial Merging (and their reminder text). I consider this an elegant solution.

Phenomena are placed at the bottom of the deck (rather than shuffled) because I found that more natural and expedient. They can still recur unexpectedly because the deck will be shuffled whenever out-of-reach planes are removed from the map. You could also shuffle them in immediately if you wanted to; which approach you prefer doesn't really matter.

Note that, with too few actual plane cards in the deck, the game could get into a degenerate loop when you continuously reveal phenomenon cards -- hence the warning about minimum deck size. Right now, we play with a deck of around 35-40 cards total, 5 of which are phenomena, and this has worked well.

There are some niggles here with trigger ordering that I haven't investigated fully, but so far my informal play procedures have been sufficient for a few quick playtest games.

Since Eternities is not an official format, it is very likely that either you'll have to ban Phenomena from being played altogether, or you will have to make some sort of house rules regarding their use in the format, at which point how Phenomenon cards are handled is up to you and the people you play with. Since this format was created by the mothership, I wouldn't be surprised if there was an article about this very subject in the near future; and Mark Rosewater regularly answers questions from fans, so that might be one avenue you could take in order figure out the proper way to address this problem.

Not the answer you're looking for? Browse other questions tagged magic-the-gathering house-rules or ask your own question.

7
How do split cards work?
12
Does the Diplowinn variant play similarly to the original Diplomacy?
1
What is the card type Phenomenon and Ongoing?
11
How many cards can I hold? (How do conflicting effects work?)
1
How does exiling cards for Delve work?
6
How do extra imprinted cards work?
4
How does Hazoret's Undying Fury work with Aftermath cards?
9
Full explanation of how multi-phrase cards work
13
How do Companion cards from Ikoria work in Commander?