Is there a conventional way of searching for lands in a mono-red deck?

I'm constructing a mono-red deck and I was wondering whether there are any options for land search / ramp for this kind of deck? I don't want to combine my deck with green for land searching. 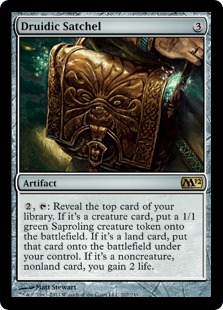 Traveler's Amulet and Horizon Spellbomb can get lands into your hand.

Caged Sun will get you lots of mana (but no lands) as will Koth of the Hammer.

Infernal Plunge and Geosurge can also have their uses.

Fiery Fall is the only mono-red card that could be considered land fetch but it's not Standard.

Other non-Standard methods for increased mana in red can be:

In the modern color pie, red is the color for fast-mana effects (called "rituals" after the old Dark Ritual). Unfortunately, the two ritual effects available in Standard, Geosurge and Infernal Plunge, don't quite hit the same sweet spot as Seething Song used to. Geosurge is still good enough to drop a big finisher (Inferno Titan, Wurmcoil Engine, maybe Balefire Dragon if you want to get cute) on turn 4, but that requires having both the enabler and the big creature in your starting 10 -- and remember that contemporary mono-red doesn't really have filtering or card draw. Most people probably figure it's safer to just play a strong four-drop.

I know some folks have experimented with B/R Heartless Summoning to play Inferno Titans quickly (turn 3 Titan using Priest of Urabrask, or turn 3 Urabrask into turn 4 hasty Titan). Those decks are rather inconsistent and vulnerable to disruption, though.

Honestly if you need consistent early-turn mana acceleration in a color other than green, I'd just play Sphere of the Suns. Like Myr, it's still an easy target for Ancient Grudge, but at least with Sphere half your mana base won't be blown up by a Day of Judgment.

Solemn Simulacrum is a great card for getting you from 4 mana to 6. As a bonus, you get to draw a card when it dies. That's nearly always a 2-for-1, and often a 3-for-1 if you can trade creatures.

The best big-mana card in red is Koth of the Hammer. His -2 ability gives you a lot of mana easily (if you have Koth and 5 lands on turn 5, for instance, you can play Inferno Titan and have mana open to stop Mana Leak, or hit your opponent with a 9-point Devil's Play). Koth's -5 ability is excellent at breaking through board stalls.

Also, with all these tricks, it's important to remember that ramp doesn't replace land drops. Most red decks running Koth as their big threat will want to consistently hit their 4th land drop on turn 4, and that means running 24 lands rather than the 20-22 you can sometimes get away with in aggro decks.

Below is the card that sprang to mind when I read your question, and I didn't see it on OrigamiRobot's list so I thought I'd add it. It doesn't ramp, but it helps get you mountains in the early game when you need them, and can be played as a big red beatstick later on when you have enough lands - quite versatile! (There are other creatures like Valley Rannet and Igneous Pouncer that cycle for mountains and also other types of land, but if you're mono-R then they're of less interest to you.) 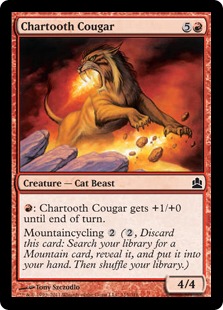 13
How can I mana ramp in a Commander game without helping my opponents?
21
How should I determine how many lands of each different color to put in my deck?
10
How can I get rid of indestructible creatures with a Red and White deck?
2
How to counter an aggro deck with massive +1/+1 counter packing
17
Are there any non-green, non-artifact mana ramp cards?
3
How can I efficiently filter MagicCards.info searches down to cards castable with only certain mana colours?
4
How can I search MagicCards.info for an exact color identity match?
2
How many mono-red damage doubling effects are there?
17
How to build a budget-friendly manabase for a 5-color deck?
1
Can a deck with a mono-colored commander have cards with other colors than its commander in it?