Playing at a matchpoint Swiss pairs event yesterday, I played this hand as north. 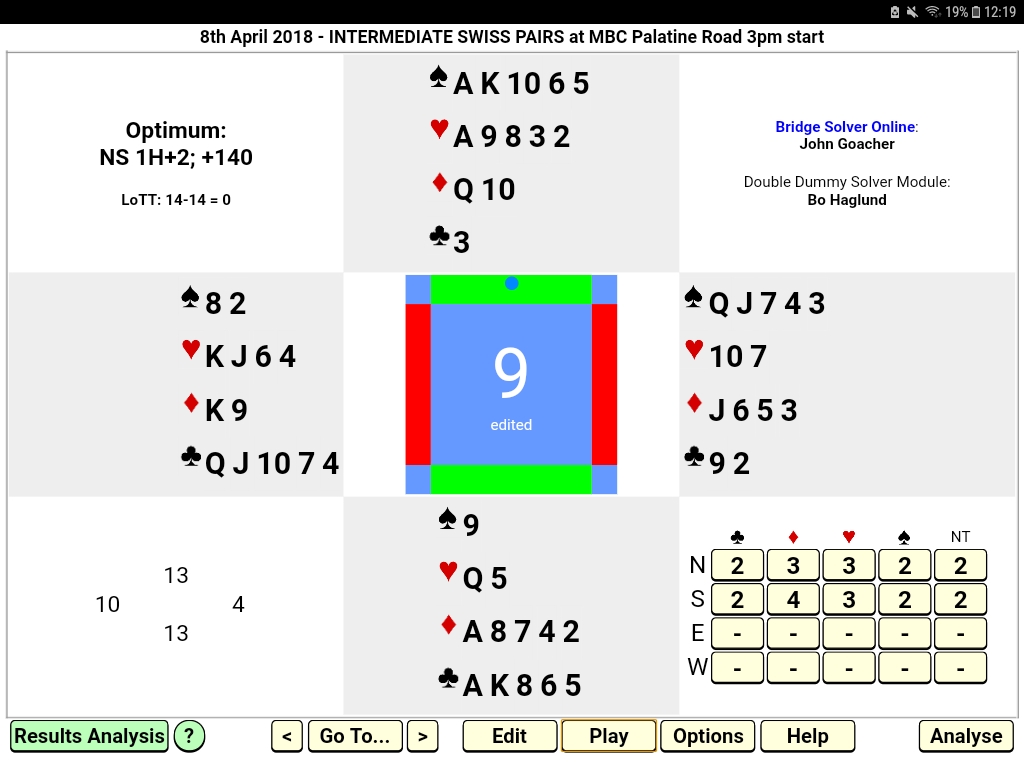 Our auction went 1♤-2♢-2♡-3NT-4♡. I had difficulty choosing what to bid over 3NT. South could have bid the fourth suit to look for a major fit so I knew I would likely be playing in a seven card fit. What action would you take and why?

You could attack Diamonds before touching clubs, while the A♧ is still an entry to south. This sets up a long diamond, but it works only if the opp with short diamonds is also short in trump. On the actual lie, the long diamonds will be trumped.

You don't mention it, but on your line a diamond must have been discarded on the second club trick so that the second diamond can be trumped.

You also don't mention but in the 4-card ending when you hold ♤Tx ♡8x in the north hand, (after the Diamond ruff) you must lead a spade so that the opponets will have to lead trump into your 8x. This works on the actual lie.

I don't see a celarly better line of play.

On bidding, I agree with the comment that you could stop in 3NT. But on the actual lie, i don't see a play for 9 tricks, with neither black suit breaking favorably.

And I don't see a good reason to try for slam over 3NT. It certainly doesn't work on the actual lie, but with no running suit and no more than 28 HCP between the hands, it is hard to see how slam is plausible. Also the 3NT bid seems to deny any slam inters.

Duck the HK on trick 1; smoooooothly.

The lead has revealed both that HJ is in West, and that West has the long trumps (as East would have lead a low Heart with length

By retaining control of the Heart suit after the initial duck at Trick 1 you give opponents a tough time to determine a winning defense without the additional information of knowing what suit you are going to try and set up (Spades).

On the bidding I see no issue with either passing 3NT or the actual call of 4H. A gross misfit is revealed - but it is more evident to both you and partner than to the opponents. Any further action will only raise the auction, reveal the extent of the misfit to opponents, entice a penalty double, and assist the defense in their play. Time to get out.

Not the answer you're looking for? Browse other questions tagged bridge bidding .

3
Can "SWOT" analysis be useful in bridge
1
Did a bridge column make errors in discussing a hand?
2
In Matchpoints, is it worth risking a ruff to try for an overtrick in the following situation?
11
Does it make sense for a defender to lead a short major when opponents fail to find a fit using Stayman?
5
Do "flat" hands devalue a 4-4 trump fit?
4
Can you suspect false carding from the following situation?
0
Am I analyzing the following hand properly?
3
How to play AKJx opposite xxx for 3 tricks at matchpoints
2
Among good players, should one base one's play on the assumption that the opponents will play deceptively?
4
In Bridge, when should third-hand defender overtake partner's honour?