What is this alternate cut after 3-3 against double keima round hoshi?

In 38 Basic Joseki, Kosugi & Davies remark in this position:

I cannot see how one is meant to cut with 3 and a in this situation. I have not found this in Ishida, or on Josekipedia (though someone has asked a question about a) or in Sensei’s Library; though with this severely pruned search pattern (only shaded points sought): 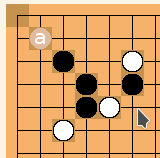 there were some matches (to which the “a” refers), but nothing useful that I could see.

I am not sure what I can have thought (though I expected a to be an answer to a different White 4, rather than achieving a different objective), but now I think I see, as Daniel T says in his answer that the marked white stones are separated:

He shows W@a–B@b, but W b and d also seem to fail, with a shaky ladder and too many cuts respectively. I still do not see when this is good; maybe the issue is which 6-3 stone B wants to separate 5-5 from, but he could just push 3 in the other direction.

The point is, that in this situation

the moves at b and c are miai: Either white allows black to connect solidly at b, or white moves at b themselves. In that case, black can still take c, yielding this situation:

Now white cannot capture the black cutting stone in a ladder by playing at e, because the two white stones lack a liberty, breaking the ladder in favor of black. The cutting stone at E17 is safe as well, so there is no way that white can connect up.

Also, a black follow-up at E14 is dangerous for white, so white will need to invest another move to either protect that cut, or make it irrelevant. I'm not sure which move would be the best continuation for white, but that consideration leaves the scope of this question anyway.

3
What joseki, if any, yields this position on page 60 of 38 Basic Joseki?
5
Why choose tsuke-nobi after a double keima against hoshi?