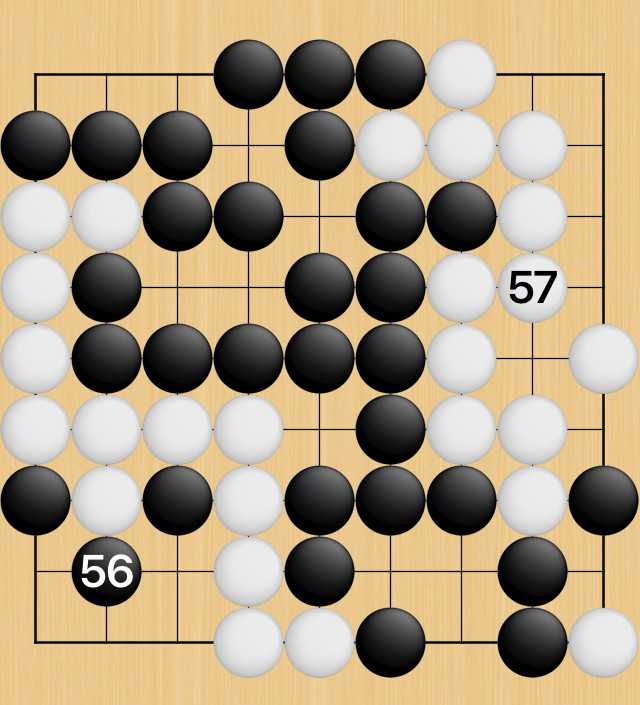 I am black and white has expanded more than I thought. It’s almost at tie at this stage but I can’t see how to win.

Edits: corrected my miscount of Black area, possible White gain
If my calculations are right, you seem to have lost or won depending on the rules in force, but you had a chance in any case!

In your position, using area scoring, I count your central group as 40 points as follows:
Counting in vertical pairs left to right two horizontal lines at a time (numbers in diagrams can only go up to 10; f, s, e stand for 4, 6 8; the 40th point is the marked ◯ at J1).

Note that the SE corner is yours as far as J3, which White cannot capture, but White should get J4.

Since you needed 41 points to win (unless the next paragraph applies), you were there, if you took one of the two neutral points (marked with crosses), namely E4, making it ⬤41:◯40½.

1 See the section on Handicap go at [https://senseis.xmp.net/?TerritoryAndAreaScoring#toc6]

But you had a chance to

win anyway, by making a seki2 in the SW, if White blundered by answering ⬤E4 immediately at ◯J4: you could then play ⬤A2, forcing ◯C2 (otherwise you play there and capture), then ⬤B1 gives you an eye in the stomach, and neither group can capture the other. In this case you get another 5 area points and White does not get a point for C1. However, this comes at a cost: White can now capture at J2, and when Black captures at J3 White can recapture a stone at J2 and when Black plays J1 White can connect at J3, forcing Black to connect at G2! This reduces your area in the SE by 2, making the area score 44:1:36, so you win in spite of komi even if you had a 5-stone handicap.

Unfortunately, if White correctly answers ⬤E4 with ◯C2, they capture the SW and still get ◯J4, yielding the same result as above (they win if compensated for the handicap)! Moreover, if you play 58 in the corner before filling J4, the only hope I see is ⬤B1, ◯A2 ⬤A1, ◯C2 ⬤A3, ◯A2 (which White wins) or ⬤A3 (double ko, which White is bound to win) or ⬤A1, ◯C2 (which White also wins).

2 seki: A stand-off where neither side can capture the other

If you use territory scoring (Japanese style), we want to know how many captives there were. Since the last move was White 57, you must have had a handicap, and there must have been 29 white and 28 black stones played. I count 32 black stones and White can have taken at most 1 captive (at H5), so you had a 4-stone handicap and White has no captive or a 5-stone and White has one; both seem consistent with the position. I count 26 white stones, so you must have taken 3 captives (at F2, G2, G1 or C6, D6, E7).

White blunders as previously described. In that case, your score is unchanged3 at 14, but White loses 11 points in the SW, which is enough for you to win.

3 I am assuming your rules count no points in a seki; otherwise you both get one more point in the SW, which cancel out and make no difference.

As far as I can tell, the only territory that is still up for grabs is r6c5, and even that only if you are playing with the area scoring system (since otherwise, filled territory doesn't score so no points are gained by playing there). But if you are playing area scoring and white is given no komi (extra points as compensation for going second), then it looks like you do win by playing in r6c5 - after that, white fills r6c9 and then both players pass (or make insignificant moves) and black wins 41-40.

12
Why is this tsumego solution wrong?
2
Overplay in orthodox fuseki - Leela AI fails miserably?
2
Making sense of this app's territory resolution
12
What is “looking for a place to resign” in go?
3
How would this seki be scored at the end of the game?
5
Go: How to count territory in this example?
4
What is this alternate cut after 3-3 against double keima round hoshi?
4
Who won this match of Go?
3
Is the black group dead in this game state? (From Nick Sibicky's lecture #246)
7
How was "komi" re-set in the past 50 years?